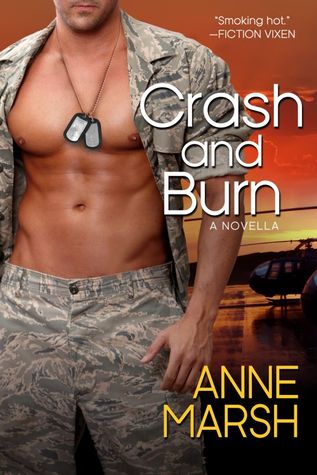 Author: Anne Marsh
Title: Crash and Burn (The Men of Crash, Fire, and Rescue #1)
Genre: Short Story & Romance
Pages: ebook
First Published: June 19th, 2013
Where I Got It: My shelf (free on Amazon)

"The marines of Crash, Fire and Rescue wait at the end of the flightlines, racing to the rescue when a military jet crashes. They’re first on the scene. First to put out the flames. And first to fight to pull an injured pilot from the burning wreckage. Dane Roberts loves his job - but he never expected his latest rescue to be a blast from his own past.

Military pilot Laura Jo Dawson hasn't stopped running since high school and her one night with the sexy quarterback. He wanted to hang on; she needed to go. She lives for the adrenaline rush of flying, of pushing herself harder, higher, faster. When her experimental jet crashes and Dane carries her to safety, however, suddenly running looks less exciting. And spending time in the arms of her sexy rescuer looks better and better..."
This was a short story...and I had to keep reminding myself of this.
Even though this was a short story, I have to shake my head at the quick make-up romance. Dane and Laura had a quick fling in High School. I'm glad that the author had them have a crush on each other beforehand. After this fling, though, Laura Jo ran off without a word. Yes, I get that her father abused her, but it was kinda rude to abandon Dane. He liked her and she liked him. I would have been MAD if that happened to me. I doubt I would be able to forgive her and wanna go back to her. Maybe thats just me....
No spoiler needed....but Dane saved her when she crashed her plane. From there it was downhill...uphill? Depends on how you look at it. They decided to meet in some building on the military base to have a couple drinks. As you know that turns into doing the McDirty (it is a romance and short story). Okay. They are both off duty, but still....someone could walk in. I just don't get it myself. During this Dane was trying to convince her that they should be a couple....why? She should be begging him...not the other way around.
Anyways, this wasn't a bad short story especially for it being free. I get that it is a short story, but things just seemed overly fast and it didn't make sense at times. Dane deserved better. Yes, I know she had issues, but still....meh. I would recommend this to those who like romances and short stories. In the end I shall stamp this with 1 star.
Favorite Character(s): Dane
Not-so Favorite Character(s): Laura Jo