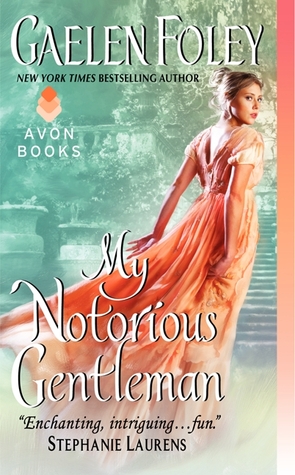 "Shy, warm-hearted Miss Grace Kenwood knows she has no chance of tempting her new neighbor, Lord Trevor Montgomery. Every eligible beauty is swooning over the brooding former spy. Even though he once kissed her senseless, he can have no interest in someone like her. Yet somehow, the seductive rogue unleashes her own inner devil…
Every lady loves a hero, but Trevor has no interest in any of them— except for the refreshingly candid Grace. If he had a heart left, Grace might steal it. She insists he's better than he thinks. He's sure she's absolutely wrong. Until danger threatens, and Trevor rediscovers how easy it is to be a hero…for the right lady."

This is the 6th book of the Inferno Club series. This could be a standalone, but I really feel like you'd be missing out if you hadn't read a book or two before this.

Well...even though I'm glad the war is over with France and with the underground baddies, I'm a little upset. hahaha. There was such a great tension in the air with all the other books, but this one...was more light-hearted. Sighs. Does that make me a bad person for wanting the tension?

At first I was really worried, because the first 30 pages bored me immensely. Is that bad to say? There was no real challenges and no real reason why Trevor and Grace couldn't be together at first. However, after page 30 things got better. I'm really glad that the author made it hard for the two to be together. They actually had to work for their love. Thank goodness. I would've been mad if it was easy for them, because they are on different social standings; he is the younger son of lord and she is the daughter of a small town minister. Also, Grace would never marry a soldier and Trevor, well, was a spy-warrior. And also...Trevor was stuck in his own self pity, because two people he cared for betrayed him. It wasn't easy for them.

Speaking of Trevor....was Trevor a named used in 19th century England? I'm not too sure...I feel like that is too modern. I shall have to look it up later on. Its bothering me........

ANYWAYS, I wanted to punch Callie in the face. Good lord she was daft and annoying. Spoiled little brat. Oooooh, *SPOILER ALERT* she falls in "love" with Trevor and catches Trevor and Grace in a compromising setting. She yells at Trevor for "leading her on", even though he did NOTHING but tell her to BACK UP LADY! Then she goes and tells the village and her mommy what happened and how Grace is a harlot. BAH! She did NOT deserve her HEA with George at the end. Nope. George deserved better in my opinion. >__> *SPOILER ENDED*. Stupid, stupid girl.

In the end, this was okay. It wasn't as good as the other books, but it is still worth the read after you read the other 5 books. Just one more book to go in the series! I'm really upset. I hope that she follows along with this idea of the Inferno Club and does like the next generation. Why I say this is because when Trevor went up the clubhouse (ha), he was surrounded by the next set of kids being trained. Oooooh, I hope Ms. Foley does! That would be AWESOME! Anyways...I recommend this to those that love HR mixed with some intrigue and adventure. ^.^ I shall stamp this with...ummm....3 stars.

I could not resist commenting. Exceptionally well written!


Feel free to surf to my blog; Tracy Z. Faller

That spoiler made me MAD

UGGGGH! I agree. What a brat she is.