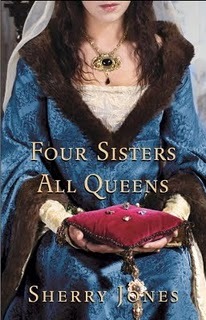 Author: Sherry Jones
Title: Four Sisters, All Queens
Genre: Historical Fiction
Pages: 434
First Published: May 8th, 2012
Where I Got It: Borrowed from Library

"Amid the lush valleys and fragrant wildflowers of Provence, Marguerite, Eléonore, Sanchia, and Beatrice have learned to charm, hunt, dance, and debate under the careful tutelage of their ambitious mother—and to abide by the countess’s motto: “Family comes first.”
With Provence under constant attack, their legacy and safety depend upon powerful alliances. Marguerite’s illustrious match with the young King Louis IX makes her Queen of France. Soon Eléonore—independent and daring—is betrothed to Henry III of England. In turn, shy, devout Sanchia and tempestuous Beatrice wed noblemen who will also make them queens. Yet a crown is no guarantee of protection. Enemies are everywhere, from Marguerite’s duplicitous mother-in-law to vengeful lovers and land-hungry barons. Then there are the dangers that come from within, as loyalty succumbs to bitter sibling rivalry, and sister is pitted against sister for the prize each believes is rightfully hers—Provence itself. From the treacherous courts of France and England, to the bloody tumult of the Crusades, Sherry Jones traces the extraordinary true story of four fascinating sisters whose passions, conquests, and progeny shaped the course of history."

After reading Sherry Jones short story 'The White Queen', I knew I had to read one of her full novels. I was not disappointed!

The story has 4 POVs. Each sister gets the luxury of telling her side of the tale. I'm really glad that Sherry Jones did it this way, because there is so much going on, but it made it possible to keep everything together. Major kuddos to the author for announcing when the POV was changing. ^.^ It made me happy.

I'm really sad, because I liked the Blanche the White Queen in the short story, but in this...not so much. She was a total -excuse my french - chienne. She was rude and selfish and down right mean. Yes, I get she is a Queen and she loves her power and her son, but the first moment she meets Margi she calls her a "countrybumpkin". You don't even know her! She was a young girl forced to marry YOUR son! >.> Throughout the whole book she was a monster to Margi for two stupid reasons: 1) Margi is pretty and Blanche hates pretty girls and 2)Her son really liked her, so she feared that Margi would steal him away for her. I mean c'mon! Blanche convinced her son that it is a sin to lust and love your wife. Stupid. Stupid! STUPID!

Okay...I'm done about my rant on Blanche.

I liked all the sisters and their POVs. I felt bad for them, because they were born in the wrong time period. They were all strong and had strong hearts. Given the chance they could've had the world, even shy Sanchia who had a horrid fate. Sanchia would have shined if they allowed her become a nun. But no - "family comes first" and she was forced to marry Richard. That did not end well...of course. Poor girl.

This was a really good book and I loved every second of it. I would have to force myself to put it down and go to work. hahaha. I just needed to know what was going to happen next. Sherry Jones has dazzled me with how she writes. It captivated me. I felt like I was there! She brought each world to life.

I highly, HIGHLY recommend this to those that like Historical Fiction or for those that want to give this genre a try. I shall stamp this with 5 stars. ^.^

Thanks Carole for telling me about this book - now on my library wish list! Cheers from Carole of Carole's Chatter

B, you should give this book a shot.

Carole, I hope you love it like I do!