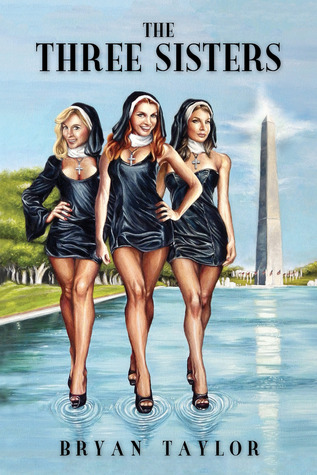 Author: Bryan Taylor
Title: The Three Sisters
Genre: Historical Fiction, Comedy, Adventure
Pages: ebook
First Published: July 23rd, 2013
Where I Got It: Given to me by the author/publisher to give my honest and unbiased opinion.

"Nuns just want to have fun! But when three former Catholic nuns have too much fun and get in trouble with the law, they become nuns on the run.
Driving back to Washington D.C. where they work at the Kennedy Center for the Performing Parts, the three sisters are arrested in Tennessee. After defeating the local deputy in strip poker, they escape from jail, and are pursued by the zealous Detective Schmuck Hole, who has personally offered a $10,000 reward for their capture on The 700 Club. Little do they know that when the three sisters visit the Washington Monument, their lives will change forever.Set in 1979, The Three Sisters is a humorous, adult satire that skewers not only organized religion, but the government, the media, intellectuals, corporate greed and every other part of the establishment. Maybe not the greatest story ever told, but possibly the funniest.“The most pestilential book ever vomited out of the jaws of Hell.” — Billy Sunday"

Like earlier stated, I was given this by the author/publisher for my honest and unbiased opinion.

Even though I read the summary, I still had no idea what was in store for me. I'm still stunned by what I read as a I write this review. I think I shall divide and conquer this review, since I'm a little tongue tied:

The Good
The Bad and the Ugly
Conclusion
A fun book for a cold fall night. It was funny and entertaining. Even though the characters felt really 2D to me, I think this characterization will happen with the nature of the book. Kuddos to the author for being unbiased with what he made fun of. Religion (of course), politics, society, women, men, and etc. I will highly suggest people who get offended earlier, should avoid this book like the Black Plague. This can be offense to those who get offended. I would recommend this to those who like funny, witty books. It was defiantly worth reading. Lot of stress these last couple of weeks, so this was just what the doctor ordered. In the end, I shall stamp this with 4 stars....again...wow. So many 4 stars lately. haha

Thanks for taking part in the tour. I'm so glad you had fun with The Three Sisters!

Hi there, There's no doubt that your blog could possibly
be having browser compatibility problems. Whenever I take
a look at your website in Safari, it looks fine however, if opening in IE, it has some overlapping issues.
I simply wanted to give you a quick heads up! Apart from that, fantastic
site!