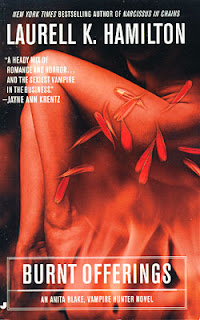 "Anita Blake is a vampire hunter. But when someone else sets his sights on her prey, she must save them both from the inferno."


This is the 7th installment of the Anita Blake, Vampire Hunter series. It had been a while since I read the last one, but Laurell Hamilton keeps the reader kept up on important pieces of information from the last books. I love this series, but I hated the ending of the last one, The Killing Dance, and I was so angry at Anita that I refused to read the next one for a while. I finally got over it and picked this up and continued reading.

I'm a big lover of Fantasy books and this has to be my favorite series in this genre. I love the world Laurell Hamilton had created! It's set in the 1990s, but the US Government actually had recognized these monsters (vamps, werewolves, witches, and etc) as US citizens. Its pretty cool how different that world is from ours. Vampires own stores and bars and clubs and werewolves can still be part of society. However, there is still a huge hatred towards these monsters. That's were Anita fits in. She is called the 'executioner' and is a licensed vampire hunter. Shes allowed to kill vamps who go bad. Also, shes an "animator" which means she can bring the dead to life temporarily (so like a zombie), so they can ask them questions for legal reasons.

I can't give much away, because it'll ruin the other books. Even though I'm not happy with the main character, Anita, I can't help but love this book too. I love the story line and the odd and awkward love triangle between Jean-Claude and Richard and Anita. It's awkward, because they are bond to each other too. I can't explain, just read the books. ^.^ I love the voice Laurell Hamilton gives to Anita, it makes you really love her. I found this book one of the most complex book out of them all. There are so many things going on that I couldn't fathom how anything would be solved. I had no I idea how the ending would end. It did and I liked how it ended....sort of. I'm still not happy with Anita. Perhaps she'll come to her senses in the next book. We shall see.

All-in-all, the only thing I didn't like about this book was Anita's decision. I can't say more than that, BUT I can't really judge the book by that. I loved the book and I have to give it 5 stars. ^.^ I recommend this to those that love Fantasy books and action books with a little bit of romance thrown into the mix. 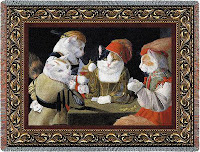 11 hour shift, that is just crazy, I am glad you made it out to post this review :)

Yeaaaaaa I wasn't too pleased about it. They've been making me work a lot of hours so when I get home I'm just too tired to even contemplate getting on the computer. I should be better this week, because I'm actually adjusting to the new hours. Huzzah! But yeah, you should check this series out. The first one is 'Guilty Pleasures'. I bet you'll like this series. Anita is a sassy-pants.