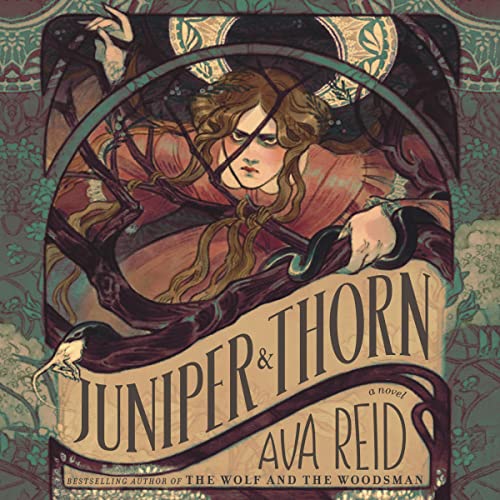 This was a dark fairytale. Mostly because it was overly grotesk in everything really.

Marrlinchen lives with her two sisters and their abusive father in a rundown house. Around them the world industrialized and he is the last wizard. Marlinchen and her sisters use their witch powers to make money.

I did like it at times, but at the same time it was just so weird. Trigger warnings with self mutilation thoughts, abuse, talk of rape. I just got this icky feelings honestly, and it was a bit too much at times and then I did not like it.

Yes conflicted thoughts about this one. She meets a guy, falls in love at once, and he with her the second time and wtf, she must have put a spell on him. Too fast.

The more I think about it the less good feelings I have. Her wolf book was great, this one was meh.

Good narration though, but that can't save it every time

As the last true witches living in a city shifting from magic to industry, Marlinchen and her two sisters are little more than tourist traps as they treat their clients with archaic remedies and beguile them with nostalgic charm. Marlinchen spends her days divining secrets in exchange for rubles and trying to placate their tyrannical, xenophobic wizard father, who keeps his daughters sequestered from the outside world. While at night, she and her sisters sneak out to enjoy the city's amenities and revel in its thrills, particularly the recently established ballet theatre, where Marlinchen meets a dancer who quickly captures her heart.

But as Marlinchen's late-night trysts grow more fervent and frequent, so does the threat of her father's rage and magic. And while the city flourishes with culture and bustles with enterprise, a monster lurks in its midst, borne of intolerance and resentment and suffused with old-world power. Caught between history and progress and blood and desire, Marlinchen must draw upon her own magic to keep her city safe and find her place within it.

I would probably get icky feelings from this too.

Damn, am I week late again?

I've been late lately too.