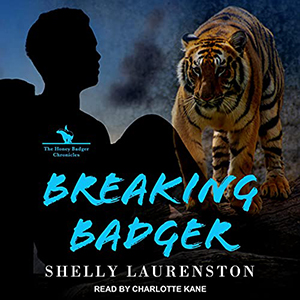 Good narrator, it does take someone great to keep up with this craziness. And lots of people to make stand out on their own.

Though I must confess, the craziness was maybe a bit too much, though at the same time I liked it cos it kept me on my toes, all the time! It never stopped.I like crazy, constant action and all that.

But on the other hand, Mads who is supposed to be the main never got to shine because her teammates, and especially the McGilligans were around all the time. So that it my biggest problem, the main was just as much a side character as the rest. Which means her romance was thrown in at the end. Sad because I want it to develop more and get more time. Sure the tiger hottie was always around so it's not like it was sudden, but more time with them please. Yes the McGilligan sisters are insane and funny, but this was Mads book. Oh and the Mads and Max this while listening fast was confusing ;)

What am I saying is, could have been more about Mads, Mads alone.

Do not start this one if you haven't read the first ones, you will feel like you are being thrown into a war zone and have no idea where you are. Def a series where you start at book 1

I did like it, but damn they be crazy.

As for the story, trying to reach the play offs, coming across hot tiger brothers. McGilligan sisters are in trouble, and lots more

It’s instinct that drives Finn Malone to rescue a bunch of hard battling honey badgers. The Siberian tiger shifter just can’t bear to see his fellow shifters harmed. But no way can Finn have a houseful of honey badgers when he also has two brothers with no patience. Things just go from bad to worse when the badgers rudely ejected from his home turn out to be the only ones who can help him solve a family tragedy. He’s just not sure he can even get back into the badgers’ good graces. Since badgers lack graces of any kind . . .

Mads knows her teammates aren’t about to forgive the cats that were so rude to them, but moody Finn isn’t so bad. And he’s cute! The badger part of her understands Finn’s burning need to avenge his father’s death—after all, vengeance is her favorite pastime. So Mads sets about helping Finn settle his family’s score, which has its perks, since she gets to avoid her own family drama. Besides, fighting side by side with Finn is her kind of fun—especially when she can get in a hot and heavy snuggle with her very own growling, eye-rolling, and utterly irresistible kitty-cat . . .

Mellliane
It is a wild ride!

OMG how do I get so behind in commenting!?