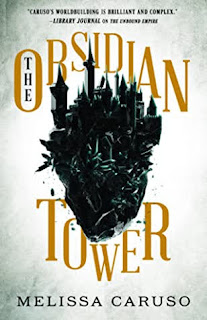 It does have its flaws too, but I can live with them all for the easy flow of things in the book. It is adult, but yes it does read as YA at times. As always sorry YA, I think it is because the main character is 21, I read her like 16. As with all her new found friends and even this enemy that shows up. I guess he can be 100, but eh, 16 the bunch of them. And also cos the world is still not fleshed out. We are there, we do not learn much.

But it was still so good! It was almost great, like omg, 5% more and it would have been. But the evil guy gave up so easily, Ryx who had these awesome dark powers where even the grass withered under her did not use them or could use them when she should have. That felt a bit plotholish. She could have vanquished her foe with just a step. Do not tell me someone is that powerful and then just eh, not this time.

Still, I really liked it. It was light. Shit goes down, what is this evil tower (like omg tell her what the evil tower is, how can one guard something and not know what. OH OH and bloody easy to gain access to said tower. Bit plotholish again.) People argue, people show up, people die, and what will happen next? I do wonder.

With all my complaints I truly liked it. I totally want more, damn goodreads for not having a button that will let me know.

The mage-marked granddaughter of a ruler of Vaskandar, Ryx was destined for power and prestige at the top of Vaskandran society. But her magic is broken; all she can do is uncontrollably drain the life from everything she touches, and Vaskandar has no place for a mage with unusable powers.

Then, one night, two terrible accidents befall her: Ryx accidentally kills a visiting dignitary in self-defense, activating a mysterious magical artifact sealed in an ancient tower in the heart of her family’s castle.

Ryx flees, seeking a solution to her deadly magic. She falls in with a group of unlikely magical experts investigating the disturbance in Vaskandar—and Ryx realizes that her family is in danger and her domain is at stake. She and her new colleagues must return to the family stronghold to take control of the artifact that everyone wants to claim—before it destroys the world.

I confess that it's the first time I hear about this one. But why not?

I wish goodreads would do that!!

Carole
Damn it goodreads, do it! ;D

Sounds like it really got under your skin in a good way. :)