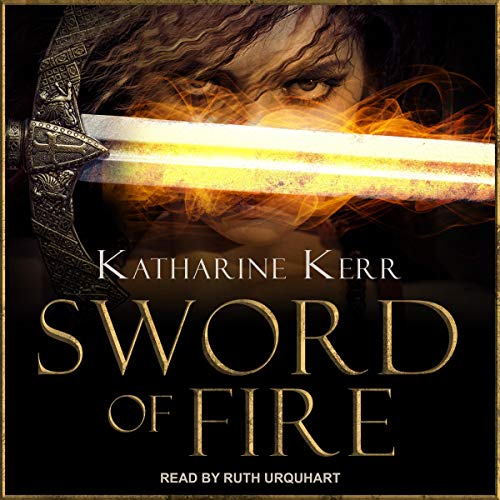 Thoughts and narration:
I listened to this and I do confess that I do not know how to spell anything! So I will just not mention places or names for everyone cos yikes. I mean I did read the previous series and did I know how to pronounce things back then. It's like Welsh mixed with something else.

Anyway, you do not have to have read the previous series (15 books!) to get this. That series takes place 300 (and more) years before this. Now the world is closing in on the renaissance and it is such a different world than the previous world.

Alyssa is attending, well let's call it university, and she is studying the law. But law is not really something that is big there. Money can buy justice. At one place a lord is taking his son home to his own court and yeah, I doubt the ruling there would be fair. Alyssa is with a group that wants the commoners to have voices too. And not just the rich and powerful.

She meets Cavan, a silver dagger (Kerr certainly has a thing for those) and they set on a journey for justice. On her side she has a fellow scholar and Lady. But Gwerbets (highest lords) never give up power that easily.

There are elves, Westfolk, magic called Dweomer, even if people do not believe in it anymore. Politics, a bit of romance and just that lovely feeling of being somewhere you used to love.

I enjoyed it and the narration was great. I did not have to wonder about spelling something in my head, lol. I also really like Ruth's narration, she is spot on for this tale. Her voice just fits!

But yes I kept wondering if those I had loved before had been reincarnated in some small roles or not. Awww good times.

All over the kingdom of Deverry, the common people are demanding reform of the corrupt law courts. In Aberwyn, the situation catches fire when Gwerbret Ladoic, second in authority only to the High King, allows a bard to starve to death rather than hear their grievances.

Guildwoman Alyssa, a student at the local scholars' collegium, and Lady Dovina, the gwerbret's own daughter, know that evidence exists to overthrow the so-called traditional legal system, if they can only get it into the right hands. The powerful lords will kill anyone who threatens their privileges.

To retrieve the proof, Alyssa must make a dangerous journey that will either change her life forever - or end it.
Written By Carole Rae at 6:30 PM

Aww, like a soft blanket, that is Deverry to me, lol