B's Monday Review: A Cowboy Like You by Donna Grant 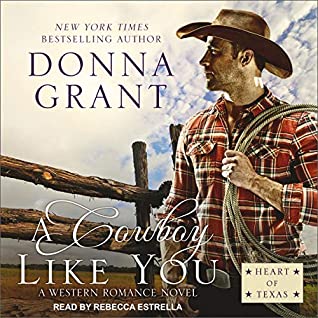 I really felt for Skylar, her ex wasn't just an asshat, he was a nasty piece of humanshite.

Danny and Skylar knew each other in HS, and he fancied her, but nothing ever happened. They meet again as she is running from her ex. Ok so yes not the best time to meet again, and sure I do wish more time had gone by. But then again, if you fall in love you fall in love. And they do try to take it slowly, and not you know jump each other at once.

The ex was a abusive, possessive scumbag. I hated him so much. And I want to say more, but spoilers, but oh it made me mad.

Danny was a good guy (I had to ask Carole about the whole cop vs sheriff thing and I still do not get it). But yes he is the sheriff.

Skylar was strong and determined. They were perfect for each other.

But before that there is a lot of ex drama, and more drama. And danger.

I liked it. There are lot of background people from previous books, but it still work great as it is.

Narrator
I liked Estrella, I have listened to her before (cowboy romances), and she is always great

Danny Oldman, the handsome Lone Star sheriff, is still single. He tells himself, and anyone who asks, that he is married to his job - and what matters most is keeping the people of his beloved Texas hometown safe. The truth? Danny still hasn't gotten over his high school crush. She moved away after graduation and took Danny's heart with her.

Skylar Long never thought she would have to flee Houston and return home - where it all began for her. But that's what happened after the man of her dreams turned out to be an actual nightmare. Now, Skylar is desperate to escape her obsessive boyfriend. Nothing shocks her more than seeing Danny again and realizing that their long-ago attraction is more powerful than ever. But can she and Danny find a way to fight against Skylar's wealthy, powerful ex who is dead set on tearing them apart?
Written By Carole Rae at 6:30 PM

Email ThisBlogThis!Share to TwitterShare to FacebookShare to Pinterest
Labels: A Cowboy Like You, Audiobook review, B's Mondays, Blodeuedd, Donna Grant

This is one of my favorite series. Oh man, I loathed her ex, too.

Generally, sheriff is elected and is in charge at county level. Police are local - cities and towns. A county is the next level of government above local, consisting of many towns/cities and unincorporated areas. Then counties make up the state, states make up the country. Got it?

Oh, and nice review... sounds like one I've read before.

I think I'm in the mood for another western soon.

Jen
Aha, I guess I just do not get it since well cops are cops here