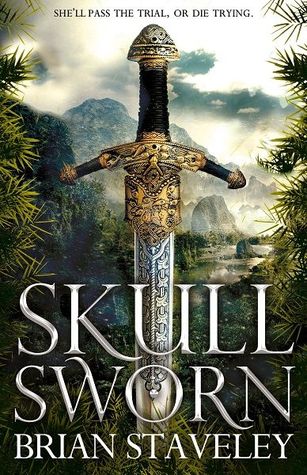 Pyrre Lakatur doesn’t like the word skullsworn. It fails to capture the faith and grace, the peace and beauty of her devotion to the God of Death. She is not, to her mind, an assassin, not a murderer--she is a priestess. At least, she will be a priestess if she manages to pass her final trial.

The problem isn’t the killing. Pyrre has been killing and training to kill, studying with some of the most deadly men and women in the world, since she was eight. The problem, strangely, is love. To pass her Trial, Pyrre has ten days to kill the ten people enumerated in an ancient song, including "the one you love / who will not come again."

Pyrre is not sure she’s ever been in love. If she were a member of a different religious order, a less devoted, disciplined order, she might cheat. The Priests of Ananshael, however, don’t look kindly on cheaters. If Pyrre fails to find someone to love, or fails to kill that someone, they will give her to the god.

Pyrre’s not afraid to die, but she hates to quit, hates to fail, and so, with a month before her trial begins, she returns to the city of her birth, the place where she long ago offered an abusive father to the god and abandoned a battered brother—in the hope of finding love...and ending it on the edge of her sword.

My thoughts:
Ok I confess, I do not remember much of Pyrre from the series that happens after this book. But that is me, I forget things, I read too much. But would I read one page from that series it would all come back.

This happens before then. She is not a priestess yet. She has her trial to finish and damn the skullsworn are freaky things. All in awe of their Death God, willingly killing everyone and dying for their god. Her trial will have her kill, if they are innocent who cares. One she must kill is one she loves. Is this something she worries about? Not in the way you think. She does not love anyone and can't pass her test. That she would have to kill that person does not bother her one bit. But I like her, her sociopath cult is quite interesting.

I can't say more but...yes it gets good. Death, deadly things and romance? Haha if you call it that. She must find love after all. And everything throws you for a loop.

Conclusion:
A good story. Read it after or before the other series. It does not matter.

Death and romance...I love it.