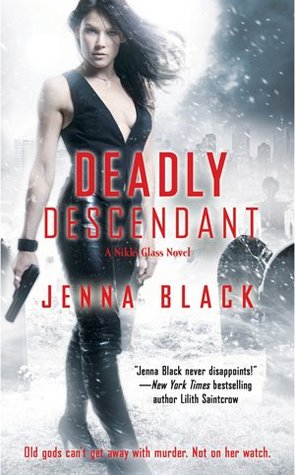 As a living descendant of Artemis the Huntress, private investigator Nikki Glass knows how to track someone down. But when an Oracle shows up, warning the Descendants about wild dog attacks in Washington, D.C., Nikki is afraid it might be a trap. The Olympians believe the “dogs” are really jackals, controlled by a blood-crazed descendant of the Egyptian death-god Anubis. Whatever. . . . If Nikki hopes to muzzle Dogboy, she’s got to catch him in the act. But when she stakes out a local cemetery, she ends up face-to-snout with a snarling pack of shadow-jackals whose bite is worse than their bark. These hellhounds are deadly—even for an immortal like Nikki. “Dog” spelled backward may be “god,” but that won’t stop Nikki from teaching these old gods some new tricks. Like playing dead.

My thoughts:
I am happy that I enjoyed this one cos I am super scared of book 2 syndrome at the moment ;)

But it was light and a fast read. And I do like those.

Nikki found out she has divine blood, and so do a LOT of people it seems, and some can become immortal (if you kill someone immortal first). And now she is stuck with a bunch of weirdos at a mansion. Another set of immortals wants to kill her and yes those guys are real assholes. The nice guys are nice and I do like their leader. Too bad she fancies someone else. Well fancies and fancies, he hates her at times but she totes fancies him.

A nice plot too with someone killing people with the help of dogs and there is a mystery to solve.

Conclusion:
Since I read this in an omnibus it felt really short, which was good ;)

Cover
Something is not right...her head?

The characters and the story sound fun!