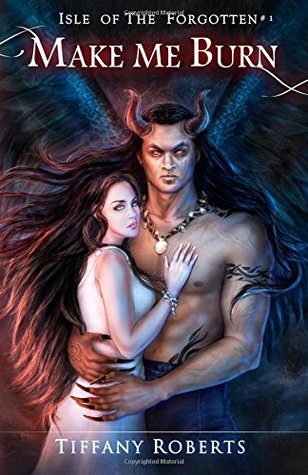 Groomed to slaughter, Morthanion spent millennia battling the forces of light, claiming countless Mesmerized by her voice and beauty, he is powerless. Captured and banished to a remote island by the Mage Council, his fury knows no bounds - until he meets her.

Aria knows survival means avoiding the other islanders at all costs. Yet when she encounters the dangerous, persistent Morthanion, it’s clear all the rules have changed. But can she forgive him the wrongs he’d done and grant him her trust…and love?

Stripped of magic, Morthanion understands that savagery is necessary to survive. When Aria’s true nature is revealed, the other inmates will stop at nothing to have her – and the demon would fight the entire world to keep her safe.

My thoughts:
I need to get this review written, I need a new concept...something fast.

Story.
A demon is sent to an island with other people that mages do not like. The island is hell, wtf is mages thinking, women do not stand a chance there. I get that mages are all, let's get rid of the baddies, but this was such a bad idea. But it makes for an interesting story since people are bad. Though we learn something late on that really makes me hate the mages, they were assholes too.

Characters:
Ok so at first I was really worried about Mort, he is such an alpha hole. He sees a woman and is all, I will have her. Omg man, ahole much, and then he makes his I have never raped anyone speech. Which I find hard believing since he is very alpha hole. But like always he does get into his big stupid brain that she is his mate. And he does care for her.

Aria, oh this girl was naive beyond words. I get that someone took care of her for 20 years ago, but I have a hard time believing she did not die one day after that person went away. She does have some sort of self-perseverance...at times. And she does go all My demon so very fast.

They are perfect for each other.

Judgement.
It was cheesy in a good way. A fantasy romance with darker moments, passion, and two people who I do not understand are still alive falling in love. So read it for the cheesy escapism.

Oh look, it comes with a warning, I know someone if you will like that ;)

Standalone in a three book series.

Warning: This book contains explicit sexual content and violence and is intended for mature readers only.


Paperback, 306 pages
Published March 5th 2016 by Createspace
Isle of the Forgotten #1
Fantasy romance
For a review

it's nice to have a good fantasy romance like that. I didn"'t about this one though I confess