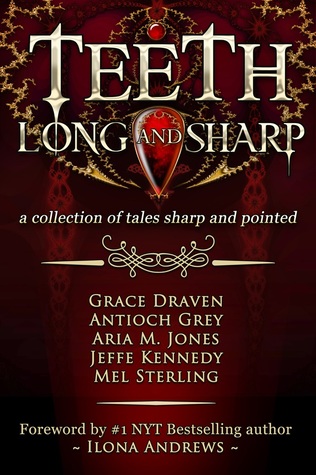 A collection of tales sharp and pointed.

IVORIES by Aria M. Jones - Eleanor resents the afternoons sacrificed to piano lessons and a disagreeable teacher who gloats over her failures and humiliations. Today, it’s Mrs. Lundemann’s turn for a sacrifice of a very different nature…

NIGHT TIDE by Grace Draven - Something hunts the surf at night, luring villagers to their deaths with a lullaby of sorrow and the torture of nightmares. Blessed with the gift of water-sight, Zigana Imre senses the presence of an ancient predator possessing a taste for human flesh sweetened by grief. With the help of a child of earth, she will battle a spawn of the sea to protect a loved one and save a man who will one day save a world.

THE NOISE OF FUR by Jeffe Kennedy - The first time, it came at night…

In the forest, a Thing prowls, picking off members of young Raven’s tribe. If they flee their home, they face starvation. If only Raven can answer the question of what kind of fur makes that noise.

VENETRIX by Antioch Grey - A merchant and a poet come to the City, seeking justice for the murder of a relative, and if justice cannot be found, they will have revenge. They collude with vampires, negotiate with mermaids, share ale and meat pies with gargoyles and navigate the prisons, waterways and court system of a city ruled by a Master possessing long life and even longer teeth.

The City will make you a fortune, or it will kill you, but it will always change you.

THE VAMPIRES OF MULBERRY STREET by Aria M. Jones - Living the simple life in small town Indiana, Mrs. H has everything she could possibly ever want: a cozy house, peace and quiet, and a garden that is the envy of Mulberry Street. But when sinister outsiders disrupt the tranquility of her neighborhood, it might be time for her to come out of retirement and take up tools more deadly than pruning shears and a trowel.

VOICE OF THE KNIFE by Mel Sterling - Biologist Charles Napier doesn’t mind getting lost in a Florida swamp—it’s part of a scientist’s job. Logic and training will get him out safely. Except lurking in this swamp, there’s a monster Napier’s science can’t explain...a lonely, exquisite, desperate monster.

My thoughts:
This anthology has a couple of novellas in it. Scary? Not really. Just you know, stories. With some creepy paranormal vibes.

IVORIES by Aria M. Jones
A kid hates playing the piano. And something strange will happen during the lesson. To be honest I am still not sure what happened. I must have missed something.

NIGHT TIDE by Grace Draven
I liked this one. Something is out there in the water, our heroine has water sight or what it was called, and something needs to be done. We also learn about her village and family. But there was one thing that rubbed me the wrong way, certain feelings she had. It just made me dislike her at the end.

THE NOISE OF FUR by Jeffe Kennedy - The first time, it came at night…
There is something hunting in the forest killing. What is it?
I was reading and noticed 3 names that means Raven in other languages, so I checked, and yes it was a theme. I liked that, very cool. Nice twist too.

VENETRIX by Antioch Grey
It has promise, but it went on too long. Which is a weird thing saying about a novella. I just wish they had cut to the chase. But the world was interesting and it would be a good fantasy novel.

THE VAMPIRES OF MULBERRY STREET by Aria M. Jones -
This one was a bit, what is happening? The whole X thing came around so what? Anyway vampires, a nice old lady next doors. What will happen?

VOICE OF THE KNIFE by Mel Sterling -
This one had a really slow beginning, but then it picked up as the guy goes further into the swamps, and there is something there...there it did get interesting.

So yes, not scary. Just paranormal stuff with no happy endings. Bad things will happen, bad things are out there and want blood. Some good, some got better. As always then.

Novellas. Phew. Not even scary.

Not even if you were 5