Today, we have a special guest on the blog! May we have a nice warm applause fr Hannah Fielding, the author of the new book 'Indiscretion'! She was so sweet to have an interview with me. 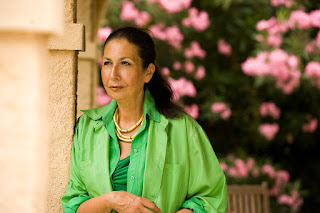 Tell us about yourself

I was born in Alexandria, Egypt, a city founded in the year 332 BC by order of Alexander the Great, a Greek king of Macedonia. The rambling house in which I grew up was built on a hill facing the Mediterranean, commanding the most breathtaking views of the ever-changing sea, with its glowing sunsets and romantic moonlit nights.

I went to a convent school, and after I graduated with a BA in French literature, my international nomadic years started. I lived mainly in Switzerland, France and England, and holidayed in other Mediterranean countries like Italy, Greece and Spain. After falling in love with my husband, we settled in a Georgian house in Kent where I brought up our two children, while looking after horses and dogs and running my own business renovating rundown cottages.

My children have now flown the nest, and my husband and I spend half our time in our Georgian rectory in Kent and the rest in our home in the South of France, where I write novels overlooking spectacular views of the Mediterranean.

Tell me about your new book, Indiscretion

Indiscretion is the story of a young woman’s journey of discovery that takes her to a world of forbidden passion, savage beauty and danger.

The setting is spring, 1950. Alexandra de Falla, a young half-English, half-Spanish writer, abandons her privileged but suffocating life in London and travels to Spain to reunite with her long-estranged family.

Instead of providing the sense of belonging she yearns for, the de Fallas are riven with seething emotions, and in the grip of the wild customs and traditions of Andalucia, all of which are alien to Alexandra.

Among the strange characters and in the sultry heat of this country, she meets a man who awakens emotions she hardly knew existed. But their path is strewn with obstacles: dangerous rivals, unpredictable events and inevitable indiscretions. What does Alexandra’s destiny hold for her in this flamboyant land of drama and all-consuming passions, where blood is ritually poured on to the sands of sun-drenched bullfighting arenas, mysterious gypsies are embroiled in magic and revenge, and beautiful dark-eyed señoritas hide their secrets behind elegant lacy fans?

Indiscretion is a story of love and identity, and the clash of ideals in the pursuit of happiness. Can love survive in a world where scandal and danger are never far away?


Who is Alexandra de Falla?

Alexandra de Falla is a spirited half-English, half-Spanish woman. She is intelligent, sensitive and curious, but most of all a romantic – in fact, she has made a career of writing romance novels. To escape the stifling background of post-war England in the fifties, but mostly to find her roots, she embarks on a journey to Andalucia, where she meets her estranged Spanish family. At El Pavόn she comes up against the bigotry of 1950s Spain – the hero, his family and the wider society all adhere to ways she does not understand, and indeed condemns because to her they belong in the dark ages. Proud and a staunch individualist, Alexandra recklessly follows her own naïve star, and, in view of the times and the places, almost ruins her life. Still, she definitely has an emotional freshness which comes through immediately, a quality that Salvador, being a conservative Spanish male, finds highly attractive. Her unworldliness might land her in trouble, but nevertheless, her innocence is not without charm.

Alexandra is therefore a heroine caught in an inner battle between being ‘modern’ and being ‘old fashioned’ in terms of how she reacts to family responsibilities and to the men she meets.

Out of all places in the world, why Spain?

I am an incorrigible romantic, and Spain is a land of flamboyance and drama. Where else do men flirt with death every afternoon for entertainment? The people are intense; their culture, their music, their traditions personify passion and fire. Even their national dish paella is a rainbow of vivid colours, with a flavour to match. Life is lived to the full. The Spanish seem to be totally in tune with James Dean’s immortal words, ‘Live as if you’ll die today.’

For me Andalucia, in southern Spain, where the action of Indiscretion takes place, is overflowing with bygone charm. All year azure skies, dazzling sunshine and sweetly fragranced gardens… colour, romance, emotion and the flamboyant figure of a flamenco dancer or the torero in the arena, sword and cape in hand, beneath the scorching sun.

The fiestas and ferias are charged with music and dance, conjuring an image of open air, moonlit skies, and all the aromas that a warm summer’s night has to offer. Women in bright-coloured dresses and silk shawls carrying rainbow-painted fans in brilliant designs, the ladies’ secret language of love. Courting couples on horseback or dancing the most evocative sevillanas. The crowded little terraces underneath the orange trees that dot the pavements and the maze of winding, narrow streets that provide shade from the hot sun. The dazzling, quaint pueblos blancos, white-washed villages hanging on steep cliffs, their houses huddled around a ruined Moorish castle, piercing the deep-blue sky. The peasants working in the fields, with their sparkling black eyes and their faces weathered like the bark of the native olive trees in the breathtakingly dramatic landscapes. The wide avenues lined with spectacular purple Jacaranda trees. The splendour of the magnificent buildings and monuments.

These are some of my sources of inspiration which portray the vibrant world and fruitful diversity of the culture of Spain; but they are only the tip of the iceberg. Wherever you turn, romance is present… what else could I do but fall in love with this magical country?


What is one thing you want people to take away from this book?

My romance novel Indiscretion poses a question: Can love survive in a world where scandal and danger are never far away? Alexandra feels torn between her two heritages, her two families, and two ways of life. Her attempt to reconcile these within herself is one of the main themes of my novel.

No one falls in love by choice, it’s by chance. So what are the ingredients for true love? Some people say that true love is when you don’t need to compromise. In my opinion, that is a rather simplistic answer. If that were the case, Salvador and Alexandra would never reach their happy ever after. Love takes work and compromise. When you compromise, you are not diminishing yourself: it doesn’t mean you’re wrong and the other person is right; it means that you value your relationship more than your ego.

Salvador, this Spanish man with unshakeable traditions and values, is mature enough to understand that. And because his love for Alexandra is so strong and deep, he knows when it is time to put his pride to one side and grab what life and love are offering him. For her part, Alexandra realises she should put things in perspective; the future might not be paved with roses, but she loves Salvador and he loves her, and nothing else in the world should count.

But that is not the only message I would like Indiscretion to convey to my readers. Family is very important to me. I was brought up in a rambling house in Alexandria which was pretty much like El Pavόn, surrounded by an equally sprawling family clan whose lives were all intertwined with each other. For lunch my grandmother sat at the head of a table of fifteen members of her family, which included her children and their spouses and her grandchildren. We were a clan. There were parameters within which everyone had a role. If a stranger came into our midst, the clan immediately drew together as if threatened by the outsider. A close family life can be stifling sometimes, but it also gives you strength and a sense of belonging.

I enjoyed imagining Alexandra’s experience of entering this sort of environment. Similarly, this happened to me when I married my English husband. I thought I knew England well, but despite my very international education and my numerous travels to England and other parts of the world, visiting and living in a place are very different things: different weather, different culture, and different prejudices! My English life is now my own and I am very comfortable with it, but it is a very different world to the one in which I grew up, and writing Indiscretion was not only an exercise in writing a romance story set in a place about which I love to dream, but also an interesting adventure of exploration for me.

What are you currently working on now if you don't mind my asking?
My next book, to be published mid-summer 2015, is Masquerade, the sequel to Indiscretion and Book #2 in The Andalucian Nights Trilogy. It is set in the second half of the seventies and is the story of Luz, Alexandra’s daughter, living in the New Spain that has opened its borders to outsiders and is preparing to enter the European Union.
Set in a very different era to that into which Alexandra was thrown, but one that nevertheless has its problems, Masquerade is a story of forbidden love, truth and trust in a world of secrets, revenge and mystery. Are appearances always deceptive?
In 2016, my readers can look forward to Book #3, Legacy.

Greece and Egypt, two captivating countries with huge historical and cultural heritages, are also on the map for settings in new Hannah Fielding romantic novels.


I still have many books in me. For me, being a writer is not about publishing. It is simply about writing – writing from the heart the books that I most want to read. As the great American writer Toni Morrison said, ‘If there’s a book you want to read and it hasn’t been written yet, then you must write it. 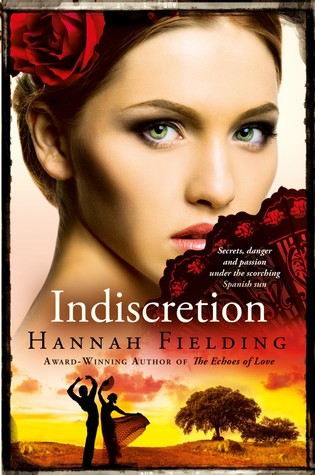 Oh, Alexandria, Egypt. What a lovely city to be born in. I am so jealous. I don't like romances but...dear me. Alexandria AND Spain.

Have a lovely Sunday, Carole!

what a nice interview, thanks for sharing!

The name sounds so familiar....