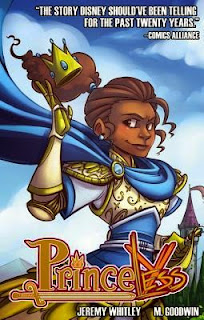 My thoughts:
Adrienne Ashe never wanted to be a princess. She hates fancy dinners, is uncomfortable in lavish dresses, and has never wanted to wait on someone else to save her. However, on the night of her 16th-birthday, her parents, the King and Queen, locked her away in a tower guarded by a dragon to await the rescue of some handsome prince. Now Adrienne has decided to take matters into her own hands! Come join the Eisner-nominated team of Jeremy Whitley and M. Goodwin for a tale of swashbuckling in the face of sexism. Princeless is the action/adventure for the girl who's tired of waiting to be rescued and ready to save herself!


My thoughts:
I really should read more comics! They are so fun, but of course I have no idea how to review them. And there might be a spoiler or two in here.


Adrienne was so cool! Already on the first page she showed of her snark when she told her mother that the Rapunzel story had plotholes. Not to mention asked why all the princesses are fair and blonde...


Anyway, sorry Adrienne, your parents still put you in a stupid tower with a dragon to guard you. But she is one cool woman and she breaks free. And she questions why women has to be saved, they can save themselves just as well. Not to mention why can only men rule? And as we see later, why can only men be blacksmiths when his daughter is the one doing the actual work?


First, I must mention a sidestory that showed up. One of the princes who was sent to rescue her. I liked his insight. He was drilled to be charming, but poor guy, he needed someone to save him too. But no one saves a prince ;)


All in all. Great pics, drawn well, I do not how to say it. Smashing illustrations guys! Fun story, snarky and good. I'd totally read more.

Comics are a lot of fun I agree, I really like one from time to time but in the end it's quite expensive and quickly read so I confess I don't read a lot of them either.

Dunno if I did you before...

High, girl.
I gotta lotta tantalizing, mellifluous illustrations on 19 blogs…
and I’m more than happy to share,
to give to you what God has granted me - a steward
in this finite existence, this lifelong demise:

faith, hope, and love,
the greatest of these is love -
jump into faith...
and you'll see with love.
Doesn’t matter if you don’t believe
(what I write);
God believes in you.
God. Blessa. Youse -Fr. Sarducci, ol SNL
Meet me Upstairs where the Son never goes down…