SUMMARY:
A politically-charged serial killer thriller set in 1953 Soviet Russia, CHILD 44 chronicles the crisis of conscience for secret police agent Leo Demidov, who loses status, power and home when he refuses to denounce his own wife, Raisa, as a traitor. Exiled from Moscow to a grim provincial outpost, Leo and Raisa join forces with General Mikhail Nesterov to track down a serial killer who preys on young boys. Their quest for justice threatens a system-wide cover-up enforced by Leo's psychopathic rival Vasili, who insists "There is no crime in Paradise."

REVIEW:
I am really upset because there is such horrible reviews on this movie. I was almost disheartened to go and see it. However, my love for the book and the story itself drove me to the theaters to see it on opening day. Of course, I dragged Boyfriend along with me.

First....I must note my excitement about Tom Hardy playing Leo. *drools* He was the perfect man for the part; I had wanted him or Chris Hemsworth (the guy who plays Thor). I am glad one of my choices had been picked. Tom Hardy, besides for lacking blonde hair, was perfect. His acting flawless and his accent perfect. 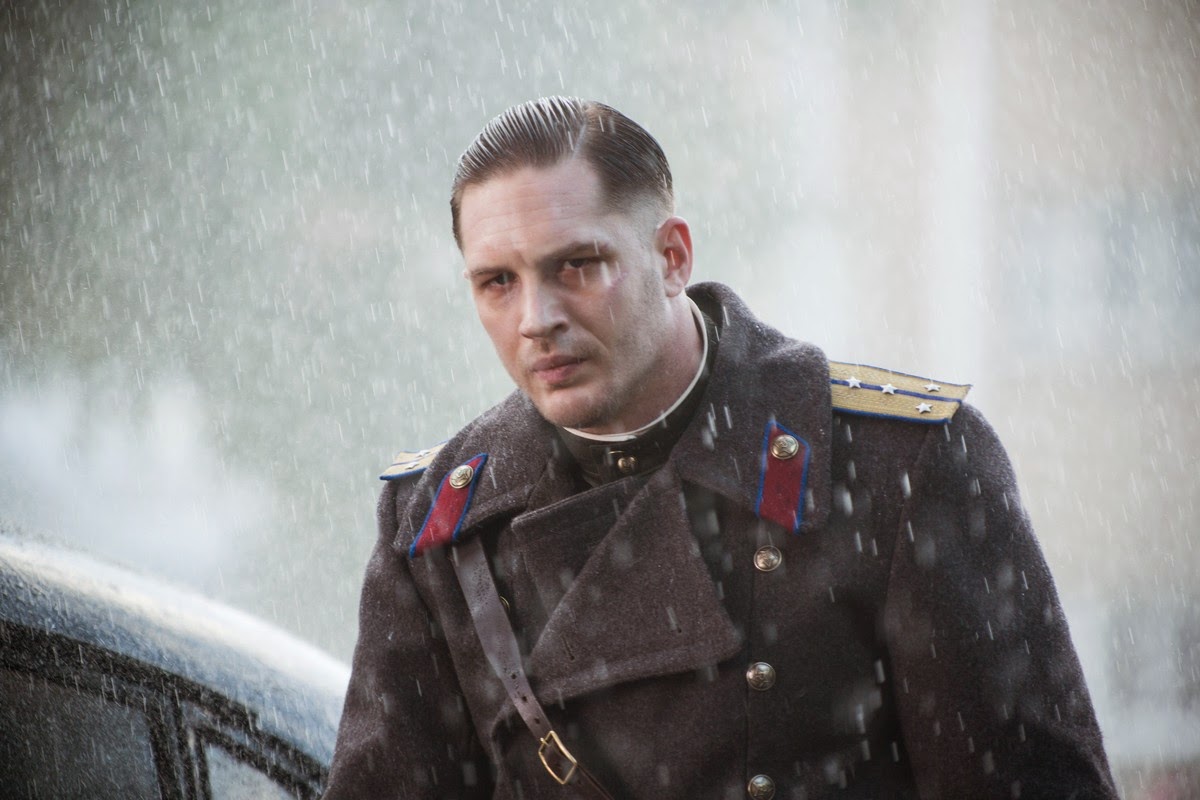 I AM SO GLAD THEY MADE ALL THE ACTORS HAVE RUSSIAN OR UKRAINIAN ACCENTS! That is rare in movies. They normally go with a British accent or such nonsense. But yes, they remained accurate with accents and even the costumes. Very nice and very accurate for the times.

The whole cast did a good job. I was annoyed with the guy who played Vasili though...he didn't seem as much as a threat as he was in the book. Perhaps they didn't give him enough screen time? Meh. But I was not as worried about him getting Leo as I was in the book.

This was certainly a fun (fun is not a good term for Soviet Russia and child murder) adventure. The only thing I am really upset about is that they left out two major plot points. I can't really say, because they both are major spoilers in the book. It WORKED without those two points, but I am a huge fan of the book and so I felt bummed when I realized they cut them out. Boyfriend seemed to like the movie enough and understand the movie without those two points, but when I explained to him what was left out he agreed saying at least one of them should have been put in. BUT again the movie worked without them.

Awwwwe, I loved the ending. I knew what was going to happened, but I am glad that they put it in. It made me happy and it gives that world hope. :3 I cannot say, but it always makes that dark story a wee bit lighter.

I really want to re-read the book now. So good. I still need to read the sequel.

In conclusion, I really, really liked this movie adaptation. I am kinda pissed that it has been given such crappy reviews. Did they not read the book? Gah. I thought it was really good. Yes, there were a couple key story points I wanted in the movie, but it didn't need it to make the story work. The acting was done well, besides for Vasili (but I blame the screenwriters for not including him more). I highly, highly recommend the movie AND the book to those that like Historical Fiction and some drama. Soviet Russia was a scary place and throw in some child murder on top and its a crazy, scary ride. Out of five stars I stamp this with 4 stars.

I will have to read the book. This wasn't even on my radar.

I did not even know this was a movie now

Felicia, you need to! Let me know how you like it!

B, its kinda underground. :) It just came out in the States the other day

I want to watch it very badly!

Its a good one!

Oh yes I saw the name of this one but nobody is speaking about it so I confess that I passed but now you made me curious because it sounds well done. Maybe.

It didn't get much publicity.