"LOVE AND DEATH
The bloody battle to rule Japan has begun: The Iga and the Kouga clans are locked in a fight to the death. Driven by a centuries-old hatred, each clan will do anything to annihilate the other. The Kouga clan is engaging in a little espionage, and has planted a shapeshifter, disguised as an Iga ninja, in the Iga palace. Meanwhile the Iga clan turns to its last, best hope: their new leader, Gennosuke, the only one who can defeat the Kouga’s formidable leader, Oboro. But is she willing to kill the man she loves? As the war grows more desperate, will true love be the next casualty?"


Ahhhhhhh, I needed a nice good manga. It's been years since I read this series and I'm glad I've decided to pick them up again.

The war is just beginning to get heated and everyone is enjoying themselves, except for the lovebirds Oboro and Gennosuke. I feel bad. They just announced their intentions to marry and everyone was just getting use to the idea, but the stupid emperor wants both clans dead, so he created this challenge for them. Sighs. As more blood spills on both sides, you can feel the heartbreak slowly shattering. So tragic, so good though.

The drawings are fantasic! I love how they depict each character. Warning, though, it is a graphic novel, so young kids should not be reading this. Sometimes its overly graphic, but what can you do? There were a couple scenes that were over the top for my liking, but hey...it does warn you on the cover.

Anyways, I can't release much for I fear of spilling any major spoilers. In the end, I grant this 4 stars. "Thanks to the machinations of the Ieyasu Tokugawa, the age-old truce between the Kouga and the Iga clans is no more–and now a fight to the death will decide which clan reigns supreme. Oboro has blinded herself in order to avoid having to kill Gennosuke, her lover and her rival. Meanwhile, Gennosuke has urged the Iga clan to join him on a journey to Sunpu to find out the real motives behind Ieyasu Tokugawa’s orders to fight. But the Iga has other plans. The hirsute Nenki and the butterfly-wielding Hotarubi rush to assassinate Gennosuke, while Tenzen has sinister intentions for a defenseless Oboro. The epic battle of blood and betrayal continues!"

Things are heating up! Even dear old Gennosuke has even joined in the fight. I'm sorry but he is the last man I would go up against. Hell....the only way to beat him is freeze him so you can at least get a hit in. Man ol' man. He has the ability to slow down time to a near halt and just destroy you as easily as taking a stroll in the park. The only one who can has a chance is poor Oboro with her eyes of death. Can you see where this is heading??? Oboro knows this herself and blinded herself temporarily. Gah, what we do for love I suppose. But yeah...I would refuse to fight Gennosuke. Great guy, but don't piss him off. 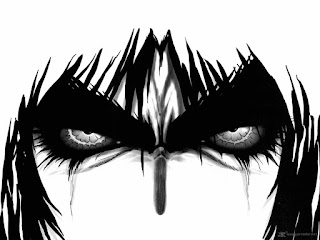 Not only are things heating up between the clans, but there is some drama and betrayal happening within the clans. Bad ol' Tenzen. Tsk tsk. So much is at play now and there is so much going on. I would recommend at least reading the second Volume, before tackling this.

All-in-all, I reall adore this manga series. It's so much fun and its an awesome twist on the Romeo & Juliet tale we all abhor/adore. I feel its 100% better. Haha. I still need to get my hands on the book version of the manga which was the inspiration for this. Well, I shall stamp this with 5 stars. I recommend this to those that like manga and anime. Or for those that just like a little war and love.

I wish I could read more manga

Me too...I love this series and its been ages since I've read this, so I made a point to read it this spring. hahaha.