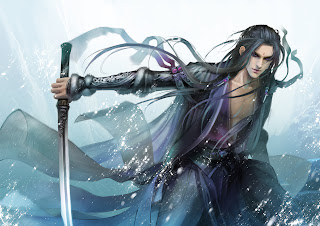 The Prince Warrior
by: Carole Rae

Once upon a time ago I was a prince who was a nobody. I was a sap. I was weak. That all changed when the bandits stole my precious jewel. My light. My love...my dear future wife. I was not able to save her, because I was not a man. Yes, I knew the basic ways on how to use a weapons, but I was so spoiled and I stuck my nose up at such tasks. “Who needs to bother with this, when one has bodyguards?” I would say. None would argue for me, because I was the Golden Son.

Though I was the younger son and my chances of sitting in the throne was slim for there was three brothers ahead of me. My parents loved my brothers, but they loved me more. I was their Golden Son. I took after my mother and was slim while my brothers had my father's stately and broad stature. I was beloved, but when my mother died, my father Emperor sat me upon a Golden pedestal and trimmed me to the weak man I was for I reminded him of my mother.

It was a nice life and I loved being treated like a fragile vase for I drank, ate, gambled, slept til the Sun was high in the sky, and slept with the whores at court. A grand and carefree life.

My jewel came into my life...the bride my father chose for me to marry. Our betrothal was made when we could barely hold our heads up. Her father was my Emperor Father's top General and since we were born on the same night, it was deemed “fate” and I agreed once I laid my eyes on her. My heart fluttered and pounded like the waves upon the beach. Her dark black eyes attached to my soul and I gave up my carefree life. Her sweet smile opened my heart to love. However...she is gone, now because I was no man and could not save her.

I will find her.

I will kill the men who dared take her from me that frightful evening.

I realized I was meant to wield this sword.

This sword will taste blood.

“What a lovely jewel.” The man crackled and dragged a finger down her pale cheek, “She will look even lovelier in my Boss' bed. Right lads?” The bandits laughed.

I pulled and tried to remove myself from the strong hands of the smelly bandits, “Let her go! I will give you any amount of money you want.”

The top bandit, I assume, tsked at me, “You really don't know the worth of whores of late, do you? It will take many beds but she will earn more then you can give us. However, the Boss wants to taste this...pearl first before he lets her go and make us money. Maybe if she's good enough, she'll be the Boss' new toy for a while.”

Her eyes shone pure fear. She tried to pull away, but every time she attempted the bandit squeezed his grip and pulled her closer to his body. The rage inside me grew.
“LET...HER GO!” I yelled.

The bandit studied me for a while and said not a word for what seemed an eon. Finally he replied, “No....let's go lads. You know what to do.” He began dragging Hōseki toward the horses.

I struggled and kicked and screamed her name.

“Hoskei!” I somehow managed to pull away from the bandits. I ran towards my jewel, but one of the bandits tackled me to the ground. He straddled my back grabbed my knot. He slammed my face into the mud over and over. With every slam Hoseki cried out for me to save her.....

I awake with a start and as naturally as breathing my sword had slipped into my hand.

Breathing hard, I tried to get my mind to realize it was just a memory and dream. Finally, I managed to calm my breathing and my eyes adjusted to the present. The rain was pouring down heavy. I stepped out of my tent and stood in the pouring rain. I swung my sword and sliced the raindrops, still trying to slow my heart rate and bubble down my anger that the memory arose.

You're a good writer on the spot. Enjoyed this very much!

Why thank you Randi Lee.