I got the majority of my homework done, so I allowed myself to participate in this week's FFF. I didn't do much editing and I wrote this in a tired state, so don't mind if my story is rubbish. hahaha. Also, I was surprised at what I created. It was what I initially planned, but I allowed my imagination go where ever it wanted, so TADAH! I have an idea forming in my brain as a mini series....mhmmmmmmm. 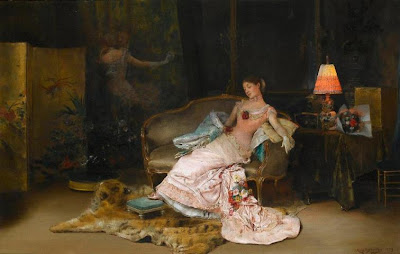 Lust is a Sin: Tale of Francine
by: Carole Rae

He haunted her dreams. She could not get the blasted man from her head. However...it was fruitless to allow herself to think on him even for a second for the man was married. The man belonged to another. The man belonged to her sister, Mary. Francine loved her sister more then anything in the world and that was why she tried to keep the blasted man from her head. However, the snake kept slithering in. She let out a sigh and flopped onto the settee and threw her feet up onto the footstool that was blue and did not match anything else in her bedroom.

She had to leave that party.

It killed her to see them dancing and making jolly upon the dance floor. Yes, this was a celebration of HER birthday this beautiful spring night, but she could find no joy. Mary owned the heart of the man she wanted. The man she lusted over, but tried oh so hard not to. Francine let out another sigh and closed her eyes. Perhaps she just needed to close her eyes and it would make the wine stop making her head spin. Whenever she drank the bubbly goodness, her jealousy and lust became as bright as the August sun.

It didn't help. All she kept envisioning was herself dancing with her Edward...Mary's Edward, she reminded herself, he is not yours.

About an hour drifted along while she tried to keep her mind blank. She must have drifted off for she snapped awake and fell back into consciousness from a knock on the door. After gaining back her footing in the consciousness, she asked, “Who is it?”

“Oh...um....yes?” She stuttered and began adjusting her bodice and hair.

“Mary wanted me to check on you for you have been gone an hour or so my dear.”

“Oh...well...I am afraid I drank too much wine and so I had to escape for a moment for my head was hurting.” Not an entire lie.

“I see. Are you feeling better?”

Francine bit her lip. The wine was still strong in her veins, so she replied with a sigh, “Oh, no I am not. I sat upon my settee and I'm feeling sick, but I can not get myself up. I really would like to go to bed.”

After a seconds thought, Edward asked, “Would you like my help?”

A cat's smile played on her lips, but kept with the same tone of helplessness, “If it isn't too much hassle for you, Edward.”

“No hassle at all, Francine.” He replied gallantly. She nearly swooned just from the way he said her name.

“Then do come in, please.” She adjusted her bodice, she off quite a bit of skin. It made her look alluring and in needing of a strong man.

The door quickly opened and Edward walked in. Without even taking a second glance at Francine's breasts, he strode over too her. With a smile of pure friendliness, he lifted her up, “My poor, dear sister. No more wine at the next function.” He chuckled.

“Mhmmm, perhaps not.” She was on cloud 9. Her whole body was pretty much pressed up against his. She wanted him. She would have him.

Softly, as if putting a babe to bed, he laid her down and put the blanket over her, “Sleep tight, dearest sister, for you will have a raging headache in the morning.”

Francine sighed, “Before you go...could you adjust my pillow?”

Edward nodded, “Of course.” He reached above her and shimmed the pillow down a little bit and made sure it was nicely supporting her head. Before he could stand straight back up, Francine wrapped her arms around his neck and pulled him down to her lips. Her greedy lips latched themselves to his always smiling, red lips.

She was sure her heart would explode.

He quickly yanked her arms off of him and pulled away as if Francine were the Devil herself. He grimaced and wiped her taste away and yelled, “What the bloody Hell, Francine.”

She crawled out of bed and tried to walk over to him with much sexiness as should could, but she was taken over by the wine. One of her creamy breasts was nearly spilled over her bodice. With a chuckle she replied, “I want you Edward...you want me. Mary doesn't have to know.”

“This is not you, Francine. You are drunk and out of your mind! I'm leaving and you better go back to bed and sleep this off.” He roared.

Ignoring him, she tried to latch herself back onto him, but he dodged her and ran for the door. She tried to go after him, but she tripped over her Tiger rug and crashed to ground. Tears from the wine and being denied from the man she wanted came spilling forth.

Good story. I really need to get back to doing these.

Thanks. :) Yeah I made myself join this week.