Happy Friday everyone. I was originally going to skip these week because I could think of nothing for this picture, but then it struck me when I was driving home last night from work. The dialogue was the thing that first came to mind. I just imagined a velvety Irish voice whispering "we can't do this anymore" and THAT set off my little story below. What have you guys come up with this week? 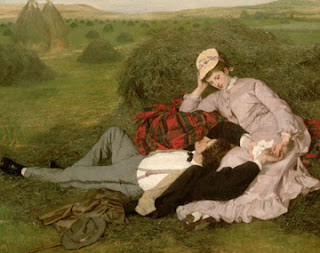 "Oh Elizabeth...we can't do this anyone more." Sighed James in his velvety Irish brogue as he laid his head on her lap and stretched his arms.

She grabbed his hands and looked down lovingly at him. She also sighed, "Oh I know James. I know my husband would kill me if he found out,but I love you too much let you go."

James looked up at her and smiled, "I love you so much Elizabeth. I wish you would divorce the man and run away with me. We can go to England or to the Continent. We could run to my homeland, Ireland. We can be really happy."

She chuckled, "That is just a dream, my beloved. I can not leave my son. You know Edward...if I attempted to take our son he would hunt us down and take him by force and kill me."

There was a silence for a moment. There was a gust of warm Oklahoma wind. The sun soon was hidden by the clouds. There seemed to be a rain on the way. Both of the lovers shivered, but remained where they were. They did not want this afternoon to every end. The older Elizabeth's son got, the less time they had time to be with one another. The older Elizabeth's son got...the older they got. Time and Edward were the enemy in these lover's eyes.

Sitting up, James looked into Elizabeth's eyes. Pain seemed to be etched into her eyes and James could sense his eyes were etched with the same pain. A couple tears trickled down Elizabeth's cheeks. James tsked and brushed them away with his thumb, "Please don't cry my dear." He hugged her and she buried her head into his chest.

Once her tears were finished, he lightly laid her down and made sweet love to her right there and then. Though Elizabeth didn't know it, James knew that was the last time they would be together. His heart couldn't do it anymore. He loved her too much and it killed him to see her with Edward. He had two tickets on the next train on to Canada. He slipped one in her purse when she was not looking. He knew she would not go with him.

-----
Elizabeth returned home. Edward was still in St. Louis and wouldn't be back in another couple weeks. She sighed as removed her hat. Though she loved James it killed her each time to be with him, for she knew time was running away.

It was a ticket.

Her heart swelled and then busted. James wanted her to go to Canada with him. She contemplated the idea for a moment, but then reality struck. She walked out the door and stared out at the Oklahoma landscape. A hawk swooped down and she could hear the distant mooing of one of their cows. With swift movements, she ripped up the ticket and tossed them to the Oklahoma wind.

Great :)
Sadly inspiration has not yes struck me as it did you

hahaha thanks. :3 Sorry about lack of inspiration