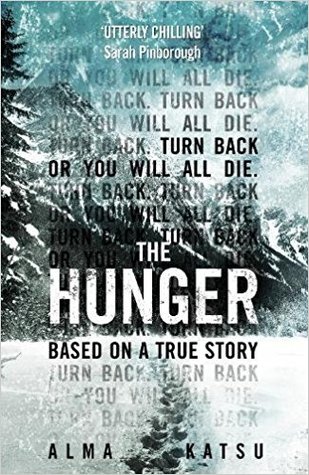 I meant to write a review at once, oh well...

I would not have read this if my bookgroup had not recced it. I fell into at once. She is a great write. Though I can't say I agree with the quote on the cover, utterly chilling. Yeah no, it was never a scary book at all.

Right, The Donner party. Nature is brutal and these people should not have started their trek to Cali this late. And then there is discord sown between on the trail, and oh they want to try this new route. No, do not try the new route!

What this book does is to bring in a paranormal angle too, what made them act like they did, and the woods are dangerous. More than wild animals lurk within.

I really want to try more from her after this one! I liked it a lot. It was more a story of human nature

After having travelled west for weeks, the party of pioneers comes to a crossroads. It is time for their leader, George Donner, to make a choice. They face two diverging paths which lead to the same destination. One is well-documented – the other untested, but rumoured to be shorter.

Donner’s decision will shape the lives of everyone travelling with him. The searing heat of the desert gives way to biting winds and a bitter cold that freezes the cattle where they stand. Driven to the brink of madness, the ill-fated group struggles to survive and minor disagreements turn into violent confrontations. Then the children begin to disappear. As the survivors turn against each other, a few begin to realise that the threat they face reaches beyond the fury of the natural elements, to something more primal and far more deadly.

Based on the true story of The Donner Party, The Hunger is an eerie, shiver-inducing exploration of human nature, pushed to its breaking point.

Melliane
It is worth a read :)

Definitely one I would read especially knowing there are paranormal elements added.