Blodeuedd's Monday: A Prince of Paper by Alyssa Cole 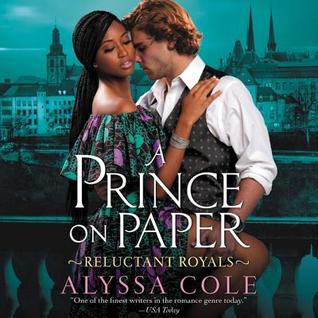 My Thoughts
I have no idea what it is this redheaded prince fascination, I mean Harry, come on, not handsome. But for you all who think so then this is a treat for you. A redheaded playboy prince who gets in trouble a lot and whose philanthropist mother is dead. And whose name is Johan.

Johan who has fancied Nya from afar. Sheltered Nya whose dad is a traitor and who told everyone that Nya is sickly and can not do anything. Yes her dad was a real piece of work.

Back to the start. Yes this is book 3 but it works perfectly as a stand alone. She attends her cousin's wedding and I guess that was book 1? And then she has this other friend there and that I do know is book 2 because I listened to a novella about that one.  I do love a good stand alone.

I liked Johan because he did not want to be a playboy prince. He does it all to keep the attention on him and not his brother.

Nya kept playing this mobile game and as I am currently addicted to one, then hey I get that girl! I liked how she wanted to become something else, but at the same time, there was nothing wrong with being her and she had to learn that.

They meet, they flirt, there is family drama and they live happily ever after. I enjoyed it.

Narrator
I liked her Nya voice and Johan's accent, but the Scottish one, even if I did not hear a lot, it was pretty bad. She had nice distinctive voices and her voice was nice listening to.
Romance always rocks in audio

Nya Jerami fled Thesolo for the glitz and glamour of NYC but discovered that her Prince Charming only exists in her virtual dating games. When Nya returns home for a royal wedding, she accidentally finds herself up close and personal-in bed-with the real-life celebrity prince who she loves to hate.

For Johan von Braustein, the red-headed step-prince of Liechtienbourg, acting as paparazzi bait is a ruse that protects his brother-the heir to the throne-and his own heart. When a royal referendum threatens his brother's future, a fake engagement is the perfect way to keep the cameras on him.

Nya and Johan both have good reasons to avoid love, but as desires are laid bare behind palace doors, they must decide if their fake romance will lead to a happily-ever-after.
Written By Carole Rae at 6:30 PM

One day I really need to try this author

Melliane,
Yes give her a go :)

I can't help but deny red-heads ;)