Blodeuedd's Monday Review: To Catch an Heiress by Julia Quinn 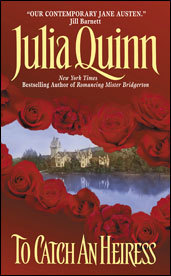 When Caroline Trent is kidnapped by Blake Ravenscroft, she doesn’t even try to elude this dangerously handsome agent of the crown. After all, she’s been running from unwanted marriage proposals. Yes, Blake believes she’s a notorious spy named Carlotta De Leon, but for six weeks until her twenty-first birthday, when she’ll gain control of her own fortune, hiding out in the titillating company of a mysterious captor is awfully convenient—and maybe just a little romantic, too.

Blake Ravenscroft’s mission is to bring “Carlotta” to justice, not to fall in love. His heart has been hardened by years of intrigue, but this little temptress proves oddly disarming and thoroughly kissable. And suddenly the unthinkable becomes possible—that this mismatched couple might be destined for love.

My thoughts:
For some reason my library had two "new" Quinn books. They do not seem to know the order of things, sure this is book 1 but when I emailed and asked if they would get book 2 they said they had so many Quinn books. But hey I read one ;)

Anyway in the middle of the book it turned into an almost farce. Oh the things that happened, it made me lol. It was so silly, but fun.

Ugh, I am bad at reviewing today. Get it together gal!

Blake is an agent that needs to catch a spy. He does catch a woman. Idiot him thinks she is the spy even though she says he kidnapped her. Fun times! Obvi these two fall in love too. Oh and his fellow agent was fun, you know book n 2 that the library wont be getting cos they have so man Quinn books (totes out of order.)

Conclusion:
Rather silly and fun