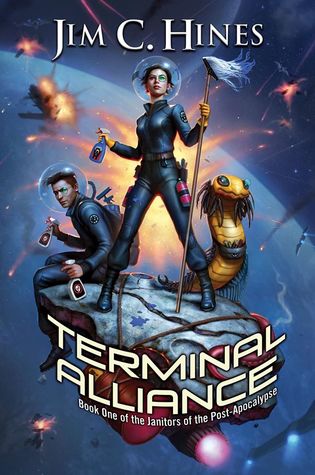 The Krakau came to Earth to invite humanity into a growing alliance of sentient species. However, they happened to arrive after a mutated plague wiped out half the planet, turned the rest into shambling, near-unstoppable animals, and basically destroyed human civilization. You know—your standard apocalypse.

The Krakau’s first impulse was to turn around and go home. (After all, it’s hard to have diplomatic relations with mindless savages who eat your diplomats.) Their second impulse was to try to fix us. Now, a century later, human beings might not be what they once were, but at least they’re no longer trying to eat everyone. Mostly.

Marion “Mops” Adamopoulos is surprisingly bright (for a human). As a Lieutenant on the Earth Mercenary Corps Ship Pufferfish, she’s in charge of the Shipboard Hygiene and Sanitation team. When a bioweapon attack wipes out the Krakau command crew and reverts the rest of the humans to their feral state, only Mops and her team are left with their minds intact.

Escaping the attacking aliens—not to mention her shambling crewmates—is only the beginning. Sure, Mops and her team of space janitors and plumbers can clean the ship as well as anyone, but flying the damn thing is another matter.

As they struggle to keep the Pufferfish functioning and find a cure for their crew, they stumble onto a conspiracy that could threaten the entire alliance… a conspiracy born from the truth of what happened on Earth all those years ago.

My thoughts:
Janitors in space, why not, I have seen it before (you have to watch Space Janitors, omg, looove that show).

Humans as always effed up and are now mindless beasts. The planet is kaputt. In comes aliens, saves a few and put them to work. As mercs and as janitors. One of those janitors is Mops, smart, resilient and really good at cleaning. And suddenly she is in charge of a space ship and what the, how does one even steer this thing? Ha, perfect.

I did have issues reading it, but that was ebook issues, I can not read ebooks anymore. The baby says NO. It takes too long reading them and that makes me lament. Funny should be read fast. You hear that, read it fast to enjoy it :)

Right where was I. Alien conspiracies. Bad aliens wanting to shoot them out of the sky. Scary humans. And so many things to clean!

Cover
Of course I love it

I wasn't a big fan of this one

It was rather dry at times I know

Oh poor you, such a great sacrifice with e-books...