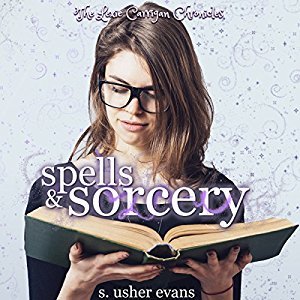 One sentence, three words, four syllables. Enough to change my life forever. And I'm not talking about the whole spells and sorcery thing.

Lexie Carrigan thought the weirdest thing about her was she preferred watching documentaries and reading the newspaper to reality TV and Twitter. But on the eve of her fifteenth birthday, her aunt and sisters drop a bomb--she's magical.

Now the girl who never made waves is blowing up her nightstand and trying to keep from wreaking havoc on her school. When a kind stranger shows up with all the answers, Lexie hopes he'll be able to help her control her newfound powers. But Gavon may not be as kind as he seems, and soon Lexie finds out that being magical is the least weird thing about her.


My thoughts.
At first (well a long time) things did annoy me. Like why was her sister such a bitch! Trust me, such a bitch, that girl needs a slap in the face. And why couldn't they just teach her magic? And tell her things? For the love of magic tell her stuff! Also everyone So over reacted. Chill people, chill.

BUT, in the end there was a reason why they did not teach her and tell her everything. Though I still felt they could have chilled a bit and told her some. Though why her sis was a raging bitch beats me. Lexie was also really immature, I mean who starts spending time with some old man they just met? Girl, haven't you watched movies?!

Still it was light and I kept wondering why they did not spill the beans. What was up with that? What was up with the secret...I can't say? I needed answers and fast. And at the end I did want more. I am still curious how things will work out when things are out in the open. Some major twists and turns there.

I also felt it refreshing that at least in this one she did not even once think about romance! Phew.

Narrator:
Hmm, is it the author herself? Nothing on GR.
But she does a good job and her voice fits that of a teen who is way over her head ;) Its light and nice
I enjoyed listening to this book

Mmm It sounded good, but IDK...

I'd say listen is the way to go. I also liked there was no silly romance