Blodeuedd's Monday Review: The Scotsman Who Saved Me by Hannah Howell 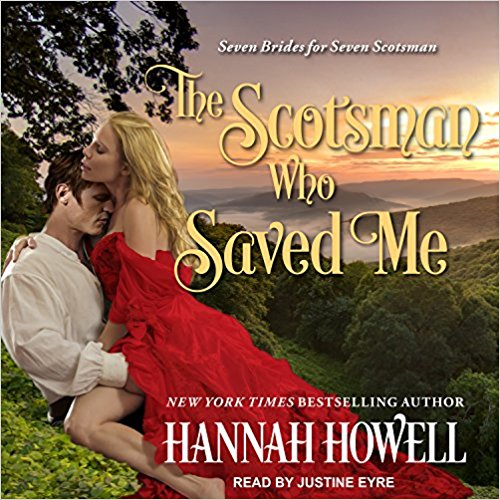 A brutal attack on Emily Stanton's family has left her for dead . . . until she is found in the woods by a handsome stranger with a thick brogue who vows to protect her. There's only one problem: As a woman with a noble English background, she has no business keeping company with such a man. For Scotsman Iain MacEnroy, Emily's high-tone accent is a bitter reminder of the oppressive regime he left behind. The last thing he needs is to be burdened by the needs of a beautiful, blue-eyed Englishwoman. But taking care of elegant, educated Emily begins to transform Iain in ways he never imagined. Could it be that the deep divisions from the old world no longer apply in the new-and that Iain and Emily can share a passion as lush and wild as the Scottish highlands themselves?

My thoughts:
Quite the beginning with Iain and his brothers finding a burned cabin and dead bodies inside. And everyone is so calm with the violence cos sadly it could happen. But yes it starts with a bang.

Emily's sister and brother in law are dead. And what is she now to do? Well luckily she was saved by a sexy Scot who is all kind and nice and brings her to his home. Emily was a survivor and determined to succeed. She may have been gentry but those days are over. I liked her, she had a good head on those shoulders.

Iain hates the gentry since he is Scottish and they sadly kicked out a lot of Scots. But American is the land of dreams. At times I did wonder about things, in listening it comes across as weird at times, I wonder if it is like that in print. He never did ask, just always went for it, and then there are her thoughts. I guess I wanted her to be more yay kisses and more. Cos now it seemed...weird. Which it is so not meant to be. They are swept away by lust, aren't they always.

There is something more but I do not want to spoil it all. The danger that is after her. What happened to her sis and brother in law and more...danger.

And then there is getting a glimpse of all his brothers, and they all seem lovely and I hope they all find love.

Narrator Justine Eyre.
I did like her voices, but a woman can never make a Scot sound as sexy as a man can...nope ;) But I still enjoyed her male and female voices. Her voice for Mrs ONeill was perfect, a totally no nonsense matron.

Email ThisBlogThis!Share to TwitterShare to FacebookShare to Pinterest
Labels: B's Mondays, Blodeuedd, Books and Reviews, hannah howell, the scotsman who saved me

I wish the heroine was saved by an ugly Irishman... ;p