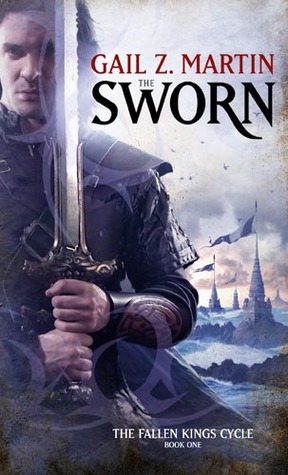 Summoner-King Martris Drayke must attempt to meet this great threat, gathering an army from a country ravaged by civil war. Tris seeks new allies from among the living - and the dead - as an untested generation of rulers face their first battle. Meanwhile, the legendary Dread are stirring in their burrows after millennia of silence and no one knows what hand wakes them and whom they will serve when they rise.

Now, Drayke turns to the Sworn, a nomadic clan of warriors bound to protect the Dread. But even the mighty Sworn do not know what will happen when the Dread awake. All are certain, though, that war is coming to the Winter Kingdoms.

My thoughts:
I think this was a bit weird, I mean the last series took place just 6 months before this. At least make it 10, or 25 and have it about their kids or something. Let them fights some battles.

I am never awed by these books, yes I know that sounds bad, they are good, just never awesome. They are light, fast to read and since this is a two book series I will read book 2 even though I totally know it will not be awesome, but it will be good.

Right, so it has only been 6 months since that last series and something bad is coming again.
Tris and Kiara worry about their kid, and the fate of their two kingdoms since peeps are all we will not be ruled by those other guys! Omg chill people. You are still your own kingdom, they just have to make enough babies to go around.

Jonmarc and his wife are with their vamps, to be honest, I was never a fan of his. But I liked how there are vamps in this world, it fits considering all the ghosts too.

A new player comes in, a prince from another country and his wife has knowledge of those who could help. I liked these two, they could totally have a tragic book of their own.

So yes it's a light fast fantasy, sure it has many pages, but it's so light that they just disappear. People die likes flies, but it still totally light. At least to me.

Conclusion:
Since it's only one book left I guess the war will come and end.

Might as well finish the last book(s) coming up!