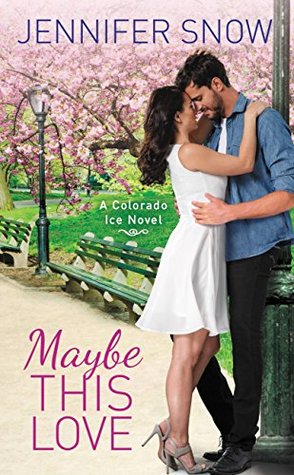 Hockey player Ben Westmore has some serious skills---on and off the ice---and he's not above indulging in the many perks of NHL stardom. When a night in Vegas ends in disaster, he realizes two things: 1) it's time to lie low for a while, and 2) he needs a lawyer---fast. But the smoking-hot woman who walks into his office immediately tests all his good intentions.

Olivia Davis doesn't need anyone derailing her career---or her dreams of starting a family---least of all a skirt-chasing player like Ben. But soon he's unleashing a full-court press to convince her that he's the real deal. She's slowly falling for his sweet, rugged charm, but with so much on the line, Olivia has to decide whether Ben can truly change---or if he's just playing the game.

My thoughts:
He was drunk, he did something stupid and now he needs to get out of his mess. And honestly it was not a bad thing he did. But yes still a mess. And sure he was a player, but I can forgive that. He just needed the right woman ;)

Olivia liked her job, she was focused and she wanted a baby. She is also the opposing lawyer. But how sparks flew. But she should stay away. But damn he was fine. Though how she could be all I can't do that, when she did not even tell him her secret.

They can't date but they grow closer. I liked that he wanted her, and she, well she does want a family and thinks he can't give her that. Being a player and all.

And there is hockey too of course, it's a sports romance after all. He plays hockey and should focus so he does not croak. It's Stanley Cup after all! At least I get hockey so I liked that.

Conclusion:
Will they wont they. Yes they will

Tell me when you run out of posts :)

hehehe I still have so many.