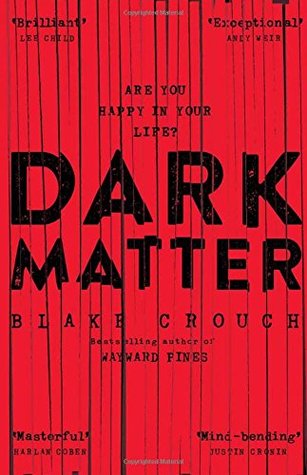 “Are you happy with your life?”
Those are the last words Jason Dessen hears before the masked abductor knocks him unconscious. Before he awakens to find himself strapped to a gurney, surrounded by strangers in hazmat suits. Before a man Jason’s never met smiles down at him and says, “Welcome back, my friend.”

In this world he’s woken up to, Jason’s life is not the one he knows. His wife is not his wife. His son was never born. And Jason is not an ordinary college physics professor, but a celebrated genius who has achieved something remarkable. Something impossible.

Is it this world or the other that’s the dream? And even if the home he remembers is real, how can Jason possibly make it back to the family he loves? The answers lie in a journey more wondrous and horrifying than anything he could’ve imagined—one that will force him to confront the darkest parts of himself even as he battles a terrifying, seemingly unbeatable foe.

My thoughts:
It was not amazing, but at the same time I could not put it down. I started reading it, and then I finished it. It was just impossible to put down, I needed to know what would happen.

It's about Jason who gets knocked out and wakes up in a strange place. And I was all wtf happened? A parallel universe? Cos here he is not married, he has no son, and he spent his life following his passion in science.

And that is the whole deal, wtf happened? What is this? And when he tries to find out, well then it got even more impossible to put down. And then it got real crazy.

Conclusion:
So there was something in the story that just pulls you in. I can still not say it's amazing. BUT it's amazing in the fact how it makes you unable to stop reading....strange really.

The cover art is meh indeed.

Thanks for the review as I was on the fence with this one.