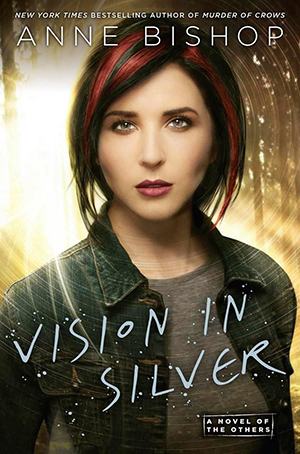 The Others freed the  cassandra sangue  to protect the blood prophets from exploitation, not realizing their actions would have dire consequences. Now the fragile seers are in greater danger than ever before—both from their own weaknesses and from those who seek to control their divinations for wicked purposes. In desperate need of answers, Simon Wolfgard, a shape-shifter leader among the Others, has no choice but to enlist blood prophet Meg Corbyn’s help, regardless of the risks she faces by aiding him.

Meg is still deep in the throes of her addiction to the euphoria she feels when she cuts and speaks prophecy. She knows each slice of her blade tempts death. But Others and humans alike need answers, and her visions may be Simon’s only hope of ending the conflict.

For the shadows of war are deepening across the Atlantik, and the prejudice of a fanatic faction is threatening to bring the battle right to Meg and Simon’s doorstep…

My thoughts:
I still say let the wild ones go crazy and destroy every human settlement (well except for a few chosen ones). Humans just can't have nice things. The HFL league drives me insane in this one, it's all, fine, you can take a few shifters but do you not realise what is out there? Answer is no, silly monkeys. Die monkeys die.

Simon, awww, I do like him. He tries so hard to understand those sill humans.
Meg, I think she finally has grown on me, I was anti Meg, then Meh meh, but now, yeah, she hads grown on me. I like her. I get her.

And they should totally get it on...one day. She needs to learn how to live first. But one day, totally one day.

The plot is those idiots wanting to make war, here and overseas. Someone shows up. There are threats and action, and I am all kill the monkeys!

This might have been the best one so far, as the series slowly has grown on me. It's still not awesome, but maybe I am getting there. They have all been good, but I expected more since it was so hyped up, and you should never listen to hype. Cos I went into this series wanting best book ever, and when I got good I was disappointed. Which is silly cos Good is Good, and good makes me want to read more.

Conclusion:
And read more I shall! I should start the next one right away don't you think?! Ok I will do that. I crave more.

Kindle Edition, 528 pages
Published March 3rd 2015 by Roc
The Others #3
Urban fantasy
Own

Curious to see what you think of the rest. I have heard good things about this series.

I love this series so much!

Book 4 was amazing. I just finished it