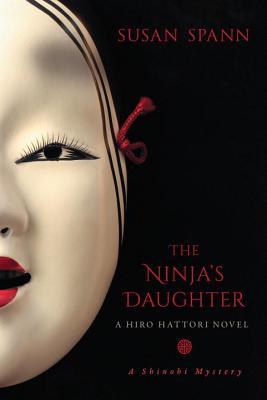 Author: Susan Spann
Title: The Ninja's Daughter (Shinobi Mystery #4)
Genre: Historical Fiction & Mystery
Pages: 230
First Published: August 2nd 2016
Where I Got It: My shelf (Given to me by the author/publisher for an honest and unbiased opinion)

Autumn, 1565: When an actor's daughter is murdered on the banks of Kyoto's Kamo River, master ninja Hiro Hattori and Portuguese Jesuit Father Mateo are the victim's only hope for justice.

As political tensions rise in the wake of the shogun's recent death, and rival warlords threaten war, the Kyoto police forbid an investigation of the killing, to keep the peace--but Hiro has a personal connection to the girl, and must avenge her. The secret investigation leads Hiro and Father Mateo deep into the exclusive world of Kyoto's theater guilds, where they quickly learn that nothing, and no one, is as it seems. With only a mysterious golden coin to guide them, the investigators uncover a forbidden love affair, a missing mask, and a dangerous link to corruption within the Kyoto police department that leaves Hiro and Father Mateo running for their lives.

Here I go again reading a series out of order. I swear - I am notorious for this. I will have to go back and read the others, because I want to know how we got here. I want to know more about the other crimes Hiro and Father Mateo have solved. I want more backstory about Hiro as well.

This does decent as a stand alone. There are some references to past events and some characters from the other books have made an appearance. There were a couple of moments I was confused and didn't understand, but overall, the author did a good job keeping the reader informed.

What a good mystery! I had two suspects on my list about halfway through and one of my suspects was the murderer.

The author also did a good job with bringing Japan to life. Such a different world and I love it. I am glad that Father Mateo wasn't an expert on the culture still, because there are so many rules and norms that Japan followed at the time. They were SUPER class driven and it is impossible to know them all if you were not raised there. So kuddos for making it realistic that Father Mateo did not know all.

My question, though, is how did Hiro know Portuguese? Seems like a random language to know especially with Japan having closed borders for SO long. Perhaps the answer is in one of the other books. THUS why I need to read them.

This certainly was a book I could not put down. I had this finished in two sittings. I had to know what was going to happen next! SO GOOD! I recommend anyone who wants to read this to read the first book first. ;) But if you want to be bad and read this, then feel free, because it does well as a standalone. However, the ending was cliff-hanger-ish and I want to read the next book that comes out!

Out of five stars, I stamp this with 5.

"My question, though, is how did Hiro know Portuguese? Seems like a random language to know especially with Japan having closed borders for SO long."

He might have learned from Portuguese traders and missionaries. 16th century means they were still allowed into the country. Most prominent of them was João Rodrigues, a Jesuit missionary who became a fluent interpreter of Japanese language and life to the West. He gained an unmatched fluency in speaking Japanese and was a lead interpreter in high level negotiations, as with Hideyoshi Iyeasu, one of the shoguns. As treasurer of the mission he handled business and worked with Portuguese shippers. I bet he could teach some Japanese his own language as well.

Ana, valid. LOL thank you for sharing some facts. ;) My knowledge of 16th century is not incredibly awesome. You are prolly right. I shall have to read the past books to understand. :)