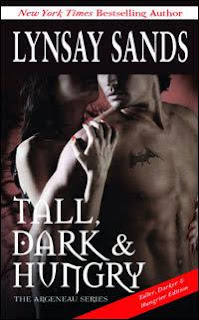 Blurb:
It bit: New York hotels cost an arm and a leg, and Terri had flown from England to help plan her cousin's wedding. The new in-laws offered lodging. But they were a weird bunch. There was the sometimes-chipper-sometimes-brooding Lucern, and the wacky stage-actor, Vincent. (She couldn't imagine Broadway casting a hungrier singing-and-dancing Dracula.). And then there was Bastien. Just looking into his eyes, Terri had to admit she was falling for him - someone even taller, darker and hungrier than the other two. She was feeling a mite peckish herself. And if she stayed with him, those bloodsucking hotel owners wouldn't get her!


My thoughts:
What I missed most in this book was the humour. The other ones had me giggling. This one, well the humour missed its mark, if it was supposed to be humour. It was still good cos it was light, and not PNR serious. So for that it still gets an ok mark, even if it was bordering good sometimes. I just missed the giggling!


Bastien meets Terri. A cousin of Kate who is marrying Bastien's brother. Most of the book takes place during 2 weeks. Terri is helping with the wedding and Bastien is falling for her. And of course at the end there is the usual OMG YOU ARE A VAMP! Drama, well with a twist.


So they help with the wedding. Sees NY. There is kissing, there is more. There is the part that was supposed to be funny? It wasn't. And there is a HEA.


Conclusion:
I still miss the funniness.

*waves* I tried reading another one today, fail this time :(

too bad it wasn't as fun as the others...