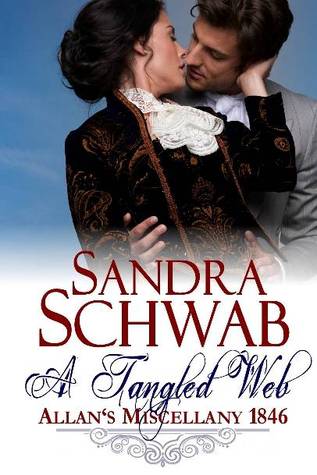 "Lawrence Pelham works as a comic artist for the magazine Allan's Miscellany. A chance meeting with a young woman dressed in mourning changes Pel's whole life, and without his even knowing, he is thrown into a world of mystery and intrigue, where nothing is as it seems to be - especially not the woman he has given his heart to.
Her whole life Sarah Browne has been told how plain she is, how nondescript, destined to become an old maid. For years she has been her family's dutiful nursing maid, but now a secret inheritance and an encounter with the charming Mr. Pelham seem to offer her a chance to break out of her life of duty and drudgery - if she dares to take it. Yet how could such an interesting, witty man be possibly interested in her boring self?And so, Sarah soon find herself entangled in a web of lies and deceit, which might even cost her the love of her life."

Oooooooh silly Sarah. Silly, silly chit. There were no reasons to lie about who she was. I get WHY she did lie to Pel, because she thought she was a no one and he wouldn't want to talk to such a "loser" nursemaid who takes care of her nephews for free and she is also a spinster in her late twenties. Totally get it, but there was no reason. He liked her before she told him anything about herself. A moral lesson to all the girls out there...be yourself; don't be self-conscious or you could push away someone who really loves you *makes mental note too*.

Now...Pel. You are an idiot. One could see a mile away she is not who she says she is. Her acting is bad and he should have used his brain. Yes, love is blind, but still....even though she says she is a widow and has her own place must you go over there and hang out? NO! It is the middle of the city and someone is BOUND to see. C'mon silly boy. Also, Mr. Pel, I get how you responded when you found out all the lies, but it was indeed a little melodramatic. Poor Sarah.

Even though both were silly and caught up in their love web (see what I did there?), I liked them. They were so human and 3D and I could really relate to both. The side characters were okay too, except for Mr and Mrs Browne who were a little 2D asshole brother and sister-in-law, but I found them entertaining nonetheless. I really liked Edward. :3 He was a cutie and such a good cousin to Sarah. I hope to see more of him someday.

I am currently mad at Mac. Very, very rude in this one especially with his loathing a woman joining in on the editorial. I'm not sure if it is because he is sexist or because he looks at the magazine as a "Boy's club" type thing. It's hard to gauge, but he made me mad. He better redeem himself later on! I am proud of him for sticking up for Pel against Sarah even though she was innocent, but I'm proud of him being loyal.

Well, this was a nice short story. Not as good as #1, but still really good. I am glad that it wasn't easy for the two to be together after Sarah's stunt. I was worried that they wouldn't be together, but c'mon...it is a romance after all. haha. I definitely recommend this to those that don't mind short stories and those that like Historical Romances. Out of five stars, I stamp this one with 4.