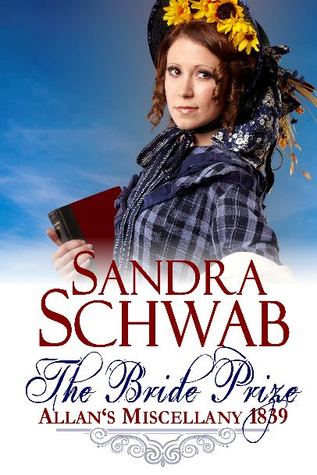 Author: Sandra SchwabTitle: The Bride Prize (Allan's Miscellany 1839 #1)Genre: Historical Romance, Short StoryPages: ebookFirst Published: May 2014Where I Got It: On my shelf (Given to me by the author/publisher for my honest and unbiased opinion)

"It's 1839, and Lord Eglinton's tournament in Scotland is the most anticipated event of the year: he and some of his noble friends will don medieval armor and joust like knights of old.
Does this mean a revival of true chivalry? Miss Florence Marsh thinks it might.Or is the tournament mere tomfoolery and the greatest folly of the century? Mr. Robert Beaton thinks it is."

Like earlier stated I was given this book for my honest and unbiased opinion.

Sandra Schwab strikes again with her new series!! I am assuming all of them are short stories (like about 80 pages or so) like this one. I haven't read them yet. However, I believe they all follow a man who works for the Allan's Miscellany, which is a paper that is a little controversial, because they are writers of the people and they look down on higher society. So some people are not fans of them. LIKE Miss Florence's padre. Oh dear.

This one was sooooooo cute. It was cute, simple, but so much fun. Even though it is a short story everything is presented wonderfully. I feel like I am there watching the rich pretending to be knights. Sandra, even in 80 pages, still manages to bring not only the world to life, but the characters as well. Sometimes in short stories the writers tend to write their characters flat and very 2D. It happens if one doesn't fine the right balance. I loved Robbie and his pal Mac. Mac is a grumpy guy, but he's adorable and I hope he is one the main men in one of the other stories (I haven't checked yet). He deserves love to make him less cynical about the world around him.

The only thing I didn't like was how easily Robbie won over Flo's dad. Flo's dad hates the paper and hates the fact that Robbie hates the higher society (since Flo and the family are pretty much higher up - lower First class). Granted, Robbie did defend himself well and make a nice passionate speech, but still Flo's dad gave in too easy for me. Yes, yes, it is a short story, so things happen quickly.

In the end, I really liked this story. It was fun, quick, simple, and quite lovely. I loved the couple! Flo is super adorable and Robbie is drool-worthy. I prefer Mr. Grumpy (Mac), though. Hopefully Mac is in one of the stories. If one loves Historical Romance, but also doesn't mind short stories pick this one up. Out of five stars, I shall grant this one 5 stars.

I need to read something by her! :D