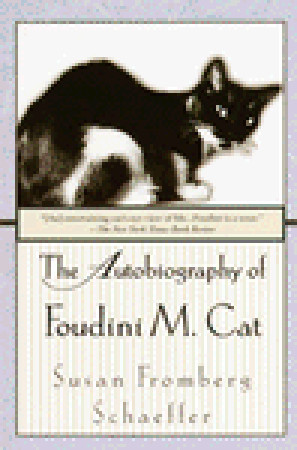 "As the irrepressible Foudini M. Cat regales us with his adventures, an exciting story unfolds. After his valiant but frail mother leaves him in search for food and never returns, the starving kitten is taken, hissing and spitting, to a frightening room with cages and men in white coats. Facing the specter of eternal sleep, the homeless cat is adopted by a woman he later calls "Warm." ("All cats like to make up strange names for things.")
From here Foudini enchants us with splendid tales of his unlikely but ultimately poignant friendship with Sam the Dog; their trips between Cold House in the city and Mouse House in the country; his mystical experiences with famous felines of the past; his near-death in a raging river that leads to a profound act of sacrifice; and his introduction to a silly young thing named Grace, which evolves into something completely unexpected."

Stumbled upon this randomly at the library and I seen that Susan Fromberg Schaeffer (author of one of my favorites 'Snow Fox') was the author! ANNNNNNNNNNND it's in the POV of a cat. C'mon? Did you really think I could resist this? haha

Oooooh this was such a great read. It is short and simple and sweet, but there are so much you get out of this. So many life lessons and so much cuteness. I simply love Mr. Foudini! It really made me miss having a cat (since mine passed a year ago) and really made me rethink all that I know about cats. Its a new perspective and made me appreciate the cat breed (and dog breed) even more.

I also loved Sam the Dog; he was such a loyal dog to not only the owners but to Foudini even though at the beginning the cat wanted nothing to do with him. It's sad what happened to him, but the author added a little something that made me smile up a storm and made me hopefully for my late dog. I shall not say for it would be giving away a lot of spoilers. Just trust me....it was fantastically done.

This really made me fall in love with Ms Schaeffer's writing all over again. It's been SUCH a long time since I read 'Snow Fox', I really should re-read it. Maybe when it's my turn for the book club again to pick a book, I may make them read this one. ^.^ It's kind of a hard one to find, so I'm not quite sure. :/ But yes, I really want to re-read it and read more of her books.

In the end, I adored this book. It was so cute, small, and simple, BUT it was written wonderfully. Foudini will make you re-think all you know about cats. I would recommend this book for someone who likes fiction novels and for those looking for something a little different in their to-read shelf. I shall stamp this book with 5 stars. ^.^

Not really feeling the book but who knows

LOL you're just scared to find out what your cat might be thinking about. ;D