Sandra Schwab started writing her first novel when she was seven years old. Twenty-odd years later, telling stories is still her greatest passion, even though by now she has exchanged her pink heart-dotted fountain pen for a computer keyboard (black, no hearts). She lives in a suburb of Frankfurt on the Main, Germany, with a cat, a duck, a sewing maching, and altogether too many books.

For this giveaway the lovely Sandra Schwab (talked about above) will be giving away not only her new novel, 'Springtime Pleasures', but also some German Tea and German chocolate. *drools* 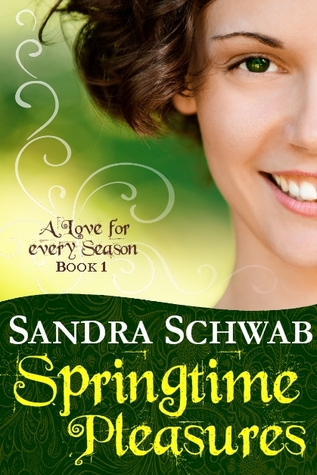 "Caught between duty ...
George Augustus Griffin, Viscount Chanderley has to marry - fast: His father has ordered him to find a suitable wife this very season. Alas, the only woman Griff has eyes for is the very unsuitable Miss Carlotta Stanton, who is not only unbecomingly tall but also wears the ugliest spectacles in all of England. Still, Griff is utterly bewitched by her intense green eyes. Yet however much he feels drawn to her joie de vivre, duty and honor demand that he stay far away from Miss Stanton.
... and desire
Dubbed "the Giantess" because of her unfortunate height, Charlie Stanton finds the London season far less glamorous than she had thought it would be - not the least because she is consigned a place among the wallflowers. But then she becomes acquainted with the very dashing Lord Chanderley, whose life is overshadowed by a terrible tragedy in his past. Ever ready to help others, Charlie is determined to rid him of his Sad Melancholia - even if it means taking on wild boars and highwaymen. However, the biggest challenge might be the elusive viscount himself and his belief that he is beyond all redemption."


How To Enter:
1. Post a comment below saying you want to enter.
2. Opened to everyone
3.  Enter before November 10th

If you want feel free to head over to Book Girl of Mur-y-Castell for a second chance at winning!

Ok I know there is a giveaway over at my blog too but if I can enter then I so wanna!

I would love to enter it sounds like a great giveaway :)

Spot on with this write-up, I actually feel this
web site needs far more attention. I'll probably be returning to read through more, thanks
for the information!

this is perfect for me - I'm tall & wear glasses, love chocolate & a hot cup of tea!

It's hard to come by experienced people about this subject, however, you seem like you know what
you're talking about! Thanks

I would love to be entered.
rsgrandinetti@yahoo(DOT)com

Wow Carole Rae, how come I did not know you had your own blog, and was just not guest posting for Blodeuedd now and then? I will be following you.

Hi Sandra, I would love to win your book, and of course chocolate and tea is a winning combination while reading.

Hope I can win a new novel, 'Springtime Pleasures', and of course some German Tea and German chocolate *yummy*

Thank you so much for this giveaway ^^ the book looks awesome
email: souma18zaine@gmail.com