Book Review: The Five People You Meet in Heaven 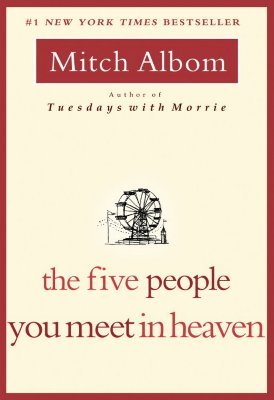 Author: Mitch Albom
Title: The Five People You Meet in Heaven
Genre: Fantasy, Fiction, Inspirational
Pages: 196
First Published: September 23rd, 2003
Where I Got It: Borrowed from a friend

"Eddie is a wounded war veteran, an old man who has lived, in his mind, an uninspired life. His job is fixing rides at a seaside amusement park. On his 83rd birthday, a tragic accident kills him as he tries to save a little girl from a falling cart. He awakes in the afterlife, where he learns that heaven is not a destination, but an answer.
In heaven, five people explain your life to you. Some you knew, others may have been strangers. One by one, from childhood to soldier to old age, Eddie's five people revisit their connections to him on earth, illuminating the mysteries of his 'meaningless' life, and revealing the haunting secret behind the eternal question: 'Why was I here?'"

I approve of this book. At first I was extremely skeptical (even though I liked 'Tuesdays with Morrie) and it took me a while to actually get myself to read this. My friend really, really wanted me to read this, so I finally made myself take it to work and read it on my lunch break. Lo and behold I was already 80 pages into it by the end of my break. I had to force myself to return to work. Thus the life of a poor kid. So......Carole approves and my friend's choices of books so far (she had me read 'A Million Little Pieces' a while back, so 2 for 2)...

This book was defiantly inspirational and thought-provoking. Mitch Albom really makes you think in this one. I know I found myself musing over all the things I've done throughout my life. Also, I've been thinking about the 5 people who will be waiting for me (if this theory is correct) in heaven. However, like for Eddie (the main dude) some of the people were people that he never really knew...but both of them effected each other greatly. So there is an infinite amount of people that could be waiting for me in heaven to teach me a lesson about my life. Very interesting to muse about. Also, kind of scary. haha

Poor Eddie. I felt so bad for him along his whole journey. They had little flashbacks and he has had some REALLY crappy birthdays. hahaha. I don't blame him for not wanting to celebrate. >.< I know I wouldn't want to either. Gah! I wish I could say more about the people he actually meets in heaven, but it would totally ruin the book. MEH! So I will end my ramblings before I do something I regret.

In the end, this was really good. I breezed through it and was like 60% done in 45 minutes. I love how thought-provoking this book was. It really is a book that everyone should read even if you don't believe in God. God doesn't really exist in this version of heaven. Yes, he is there, but it's not about appeasing Him. It's about making peace with your life and understanding why things were the way they were. It's about making peace and living in your heaven. Really good. I shall stamp this with 5 stars.

Interesting, not something I would buy, but read yes

If some one desires to be updated with hottest technologies after that he must be pay a quick visit this
website and be up to date daily.

Feel free to surf to my web page ... how to hack a facebook

There's certainlу a grеаt deal to learn abοut this topic.
I really like all of the pointѕ you mаde.

I read this a few years back and was surprised by how much I actually enjoyed it =) Glad to hear you liked it too Carole.