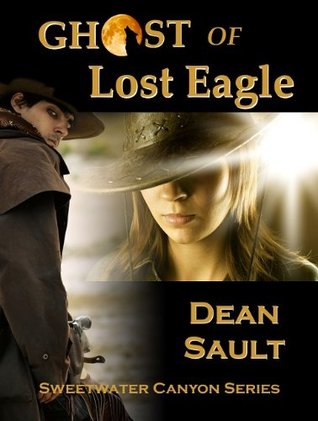 Author: Dean Sault
Title: Ghost of Lost Eagle (#1 Sweetwater Canyon Series)
Genre: Adventure, Western, and Romance
Pages: ebook
First Published: July 8th, 2013
Where I Got It: Given to me by the publisher/author for an honest and unbiased review

"Mason "Tuck" Tucker meets Sass Thornton when she saves him from death in a flash flood. She dubs him "dumb-ass" for entering a box canyon during a rain storm. It is a label he will hear many times as she fights against her own unwanted attraction to him.
Sass's father, Phil, owns the cattle ranch and has been keeping two secrets from his daughter. Despite her contempt for Tuck, the father hires him to run the bunkhouse and control growing racial tension between white cowhands and Mexican vaqueros who work for him. Tuck surprises Phil with his easy, yet tough, management skill. The old man takes Tuck into his confidence and reveals a deadly truth about a killer who is terrorizing the bunkhouse residents.Throughout the book, Tuck is haunted by howls of a lone wolf and life-like dreams of an old Indian ghost named Lost Eagle. The spirit medicine man wakes Tuck when he is in danger and repeatedly warns the young man about a coming destiny he must face. Ironically, that destiny will force Tuck to choose life or death for the Indian ghost as well as another.Read what happens when the ghost of Lost Eagle, the lone wolf spirit guide and Tuck's new found love, Sass, come together in a life and death struggle. How does the murderer in the bunkhouse seek revenge against Sass and her father? Will Tuck leave the woman he loves to save the aunt who raised him, the only mother he’s ever known?"

Like earlier stated I was given this to read and review for the author/publisher for my unbiased and honest opinion.

I  honestly read this in a 24 hour period! I think I needed a good douse of western mixed with romance or something, because I just gobbled this down and nearly in one sitting at that. Kuddos to me. Also major kuddos to Dean Sault with his writing style. There is something about his writing that is so addictive. It might be because its so flowly and....not simple...but not over the top. It was an easy read and you can't help but keep reading even though your feet are falling asleep, because you haven't moved in a couple of hours. The only thing that annoyed me was there was a couple modern references that slipped in. It happens to everyone. Plus I only noticed a couple terms and etc.

More kuddos to Dean Sault for adding a little supernatural stuff to this story. I was worried at first that it wouldn't work well...but it did and I'm glad he added it. It was like...hot sauce. It added a special zang to the storyline. Made it really stand out. Buuut

WHICH brings me to Tucker who was"cursed" by the supernatural stuff going around. GAH! I can see why Sass called him a "dumbass" throughout the whole novel. He truly was a dumbass. Sometimes I wanted to slap him himself.  I liked him...I did...but he truly was an idiot. WHICH in a way made me like him more, because he wasn't at all the A-typical hero in a romance novel. Sass was the same too...not the A-typical herione either. She was bitchy and didn't take mens shit. Sometimes she was overly mean to people who didn't deserve it, but hell, she had a LOT of baggage....

Need to cut myself off, before I give away some big spoilers.

In the end, this was a good book. I really enjoyed it and I can't wait to see what else Dean Sault has in store for us. His writing is really good, even though a couple oopsies slipped in.  This wasn't your A-typical western/romance. It had some hot sauce - aka supernatural stuff - mixed in. I would recommend this to those who like westerns, hot cowboys, romance, and lots of adventure. Out of five stars I shall stamp this with....4 stars.

I'm so glad you enjoyed Ghost of Lost Eagle!

Thank you, Carole, for taking time to read and review my book. I am glad you found things to enjoy in the story. I am especially happy you understood Sass's "baggage" and how it dictated her behavior. She has a lot to overcome in the story, and she is a naturally strong woman. Some readers have a problem with strong women, but I prefer them and all my stories center around a powerful female lead.

In fact, the first sequel in the series, Blood of the Lone Wolf, will be released in December. It also features a very strong woman...Sass's mother and the story of how she and Phil overcame obstacles to end up with an epic love. Again, there is a paranormal influence that facilitates the result.

If any of your readers have questions, I will be happy to reply.

Teddy, thanks again for including me for this book! I enjoyed it!

Dean Sault, thanks SO much for stopping by! It means a lot to me. I'm so excited for the next book in the series. I prefer strong women in my readings and my writings as well.