Blodeuedd's Monday Review: The Danger of Desire by Sabrina Jeffries 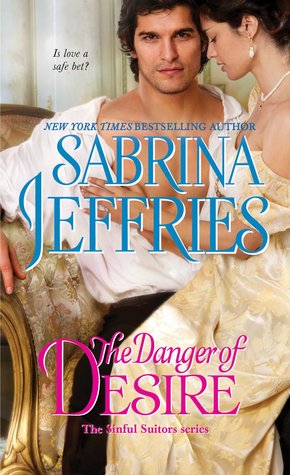 To root out the card cheat responsible for her brother’s death, Miss Delia Trevor spends her evenings dancing her way through high society balls, and her late nights disguised as a young man gambling her way through London’s gaming hells. Then one night, handsome Warren Corry, the Marquess of Knightford, a notorious member of St. George’s Club, recognizes her. When he threatens to reveal her secret, she’s determined to keep him from ruining her plans, even if it means playing a cat-and-mouse game with the enigmatic rakehell.

Warren knows the danger of her game, and he refuses to watch her lose everything while gaining justice for her late brother. But when she starts to delve beneath his carefully crafted façade, can he keep her at arm’s length while still protecting her? Or will their hot desires explode into a love that transcends the secrets of their pasts?

My thoughts:
Oh these two. Delia was sure a handful. I mean sneaking out, gambling and getting away with it. She has a good head on her shoulders but was so reckless.

Warren was a good guy, and he sure gets curious when he stumbles upon this mystery. And he is a gentleman too, he can't just leave it be.

There is also the mystery concerning her brother, who did he lose his money too. She needs to solve it. And save her home. Her brother and father both gambled away too much.

And as for Warren, he is just trying to avoid matchmakers.

But they fall in love. And she is so stubborn!

I liked the twist which I cannot speak of. Also the next book looks to be good too.