This month Blodeuedd and I will be discussing "Mrs Sinclair's Suitcase" by Louise Walters. 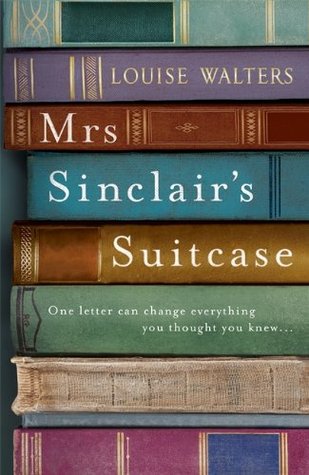 Roberta likes to collect the letters and postcards she finds in second-hand books. When her father gives her some of her grandmother's belongings, she finds a baffling letter from the grandfather she never knew - dated after he supposedly died in the war.Dorothy is unhappily married to Albert, who is away at war. When an aeroplane crashes in the field behind her house she meets Squadron Leader Jan Pietrykowski, and as their bond deepens she dares to hope she might find happiness. But fate has other plans for them both, and soon she is hiding a secret so momentous that its shockwaves will touch her granddaughter many years later...


B: Here we are again, we can never pick those amazing ones can we….

C: I feel like we have only had two successful ones we adored. You picked one and I think I picked the other. X___X

B: Which ones am I forgetting. Snow child and….

C: I honestly can’t remember. I think it was one of the first ones we picked. From the beginning so over a year ago now. LOLLL Soooooo….what did you think of the duo stories? Roberta and Dot?

B: I liked Dot’s story, but Roberta’s was soo boring. She was boring, she had a boring life. What a boring person.

C: Yes. Roberta was a total meh for me. Granted she tried to shake-up her boring existence by being naughty and cheating, but still meh. I liked Dot’s story, but I hated Dot.

B: Roberta even made cheating boring. She was all, I just do it, and I was all, at least love him. God you two are boring. As for Dot, I did not hate her...no, I did not. I can not say I liked her either, she, I can’t put my finger on it. So...tolerated her?

C: How on Earth can someone make cheating boring? I never thought I’d see the day. Don’t even love him, at least bc the sex is great and you can’t get enough. No, he was just there and she was just there. THAT was all. I hated Dot near the end, I liked her in the beginning, but at the end on how she treated Jan. I was SO upset.

B: The only time I cared for Roberta was at the end, that was good, maybe she can stop being boring now. And Dot, well, she had issues! I was all GO FOR IT! Damn you, just go for it. He is hot, young and wants you. I would totally have picked him.

C: Even at the end I was totally meh about Roberta. Well…..I get it-ish about Dot, but it was obvious Jan loved her and whatnot, but she was poop and wouldn’t do what I wanted. LOL.

B: LOL. She was poop. But yes, I ended that damn book with a DAMN! F that. What kind of ending was that. Tear at my heart again wont ya. Arghhhhhhhhhhhhhhh.

C: Hahaha. I ended it with a silent glare. Luckily it was an ebook for me, so I couldn’t slam it on the table like I wanted. So - do you think the duo story worked? Or do you think it hindered the story?

B: Roberta with her constant letters and making a boring search for answers. I wish Dot had been more lucid, and told the story. That would have worked better I think. That would have made Roberta more interesting. Maybe draw some parallels between them and make it flow better. For now it was two stories that did not really belong together.

B: Also if Roberta is gonna find love make us FEEL it. I also did not like the dad and her mum thing. I guess I understand why she had it there, but it felt unnecessary and did nothing to the story.
So we agree, that the story could have been done differently. Would it have made me liked it more...eh. Who knows. They both would need more of a strong personality.

C: I can see your point about the parents, but it didn’t bug me too much. I believe we both can agree that a different way would have been better.

B: I still thought it was a good book, that is 90% thanks to Dot. Even though the ending made me pissed. It did keep me reading cos I wanted to know, but that letter in the beginning did destroy my hopes. But a girl can still hope anyway!

C: Yes that damn letter! It was decent for me. Not horrible, but not wonderful. Just decent. I wanted more of Dot/Jan and less of Roberta and whatever she was doing. I had no hope, I wanted hope, but I had none. LOL. I’m a negative Nancy.

B: My bad for this book. I wish we could have read that other book (which we sure are gonna hate thanks to our luck), but I have hope! I guess you will have none left for that one ;)

C: Actually….I have a touch of hope. It sounds soooooooooooo good and there are a lot of wonderful reviews. :D My turn to pick right? I honestly can never remember.

In the end, the was decent for me. Roberta was a total meh and I couldn't have cared less with her story. Dot was okay...just annoying. I loved Jan and Dot made me mad about how she dealt with that whole issue. I believe if the story was told a little differently I would have liked it better. I do recommend it even though it was a meh for me. Out of five stars, I stamp this with 2. Damn near a 3, but not quite there. I feel like I am in a slump with these last few books. I NEED A GOOD ONE! LOL

We suck at choosing

Ana, actually, I think I am in the mood for something like that.