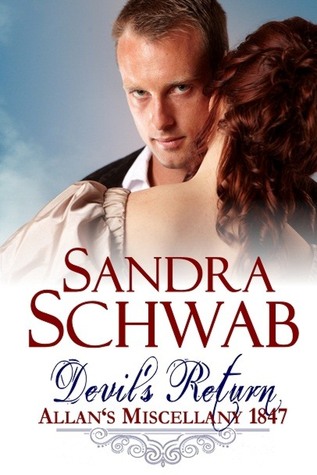 Author: Sandra Schwab
Title: Devil's Return (Allan's Miscellany #4) 1847
Genre: Short story, Historical Romance
Pages: ebook
First Published: August 15th, 2014
Where I Got It: On my shelf (Given to me by the author/publisher for my honest and unbiased opinion)

"Seven years ago Fran and Alex were very much in love. Yet because Alex was only a younger son with no prospects to speak of, Fran’s family pressured her into breaking the engagement and marrying a rich, titled man instead. Filled with bitterness, Alex left England for the New World.
Now he is back, more dangerous and more cynical than ever before. He has found fame and fortune as an adventurer, traveling the world from America to the Near East and writing about his travels for Allan’s Miscellany. He has come to London to drum up interest for his friend’s archeological excavations. Soon, he finds himself the darling of London society, admired by men, wooed by women.Fate has not been so kind to Fran. After a disastrous marriage, which has left her with deep emotional and physical scars, she is widowed and now lives in genteel poverty.By chance, Alex and Fran’s paths cross again. They have both changed so much, and past betrayals and past hurts still divide them. So surely there can be no second chance for their love…"

Like earlier stated, I was given this for my honest and unbiased opinion.

Oooooooooooooooooooooh silly families breaking up love matches JUST because they don't think the boy has any prospects. And then after they break up the couple, years later the man comes back richer then ever and the family drools all over him (like Fran's bitchy sister Victoria). Ugh. Victoria...what a snot. How did she manage to marry such a good guy? >__> I hope he leaves her and finds someone better and nicer.

Poor Fran. She was forced to leave her true love and forced to marry an old man who is abusive and mean. Then something bad happens to her and she is physically scarred for life. I cannot say what happens, but its big and it almost cost her her life. I didn't expect it honestly, so it was a twist when the truth came out. Poor girl. Stupid Alex for leaving the country over a hurt pride. I wished he had stayed, so at least ONE person would have cared for her. Hell, the sweet Dr. Grant was the only one who cared about her throughout her ordeal.

Honestly, I think this is my favorite out of the series so far (I still need to read #2)! I loved the 'Persuasion' mix to the story. That was my favorite book, so when a story mirrors it, even just a little, it makes me happy. Alex reminded me a little of Captain Wentworth, but not as bitter and he got over his hurt pride quicker. He also decided to not write a letter and hope his love forgives him and takes him back, he ran to her and made her understand and make her take him back. It was romantic and made me happy, because she needed a good kick in the arse to get out of her I-hate-myself-and-Alex-could-never-love-me-again-because-I'm-ugly-now. Psh. He is no Prince Charming now either, a bear smacked him across the chest and he has an ugly scar!

I can't wait to read more! I cannot wait for Mac to get his own story. I simply adore the man even though he is cynical and a grump; he totally reminds me of my own love, so I can't help but like him. haha.

In the end, this is the best out of the series so far. I can't wait to see what is next for the poor men of the magazine! Especially for Mr. Mac. I wish these were not short shorties, but I'll take what I can get. ^.^ Out of five stars, I stamp this one with 5.