Book Review: Where the Wildflowers Grow 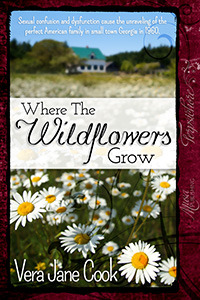 Author: Vera Jane Cook
Title: Where the Wildflowers Grow
Genre: Fiction, Drama
Pages: ebook
First Published: March 8th, 2013
Where I Got It: Given to me by the author/publisher for my unbiased and honest opinion

"Sexual confusion and dysfunction cause the unraveling of the perfect American family in small town Georgia in 1960.
Rose Cassidy's fantasy life is a haunting reminder that she's living a lie. So when she has the opportunity to act on those fantasies, she dives in without any thought to consequences.Rose's husband, Ryan, has fantasies of his own, and his actions cause unimaginable hurt [pain] to the very children he tries so hard to protect.When the happiness each member of the Cassidy family seeks so desperately to find is shattered by shame, guilt, and ultimately murder, they must each face the truth that lies deep within their souls."

Like earlier stated I was given this book by the author/publisher to give my unbiased and honest opinion.

SO MUCH DRAMA! JUST SO MUCH! It felt like I was watching a soap opera, but on paper and I was reading...not watching. That Cassidy family sure had issues. I felt bad for the cop, Jeff, who had to deal with them and hide many of their secrets due to loyalty he had for Ryan. Jeff was a good guy, even though I had to shake my head at him a few times when loyalty for the family took over and the law was ignored. Especially when it came to something Rose did....sorry, but I would have ratted her out if I was a cop.

Kuddos to the author for keeping me on my toes. I pretty much guessed a lot of the things that were going to happen for the first half of the book, but then things exploded and I was utterly on the edge of my seat. I had no idea how everything was going to end. I was a little mad that certain people got a HEA that really had no right to one, but what can you do? Some of those certain people DID redeem themselves in a way, but still....>.>

There was so much going on and I'm afraid I have to be closed-mouthed so I don't give away any major spoilers. I spoiled it all for boyfriend, but it's not like he's going to read this anytime soon. This book was a chick lit in some senses. If this was to be a movie it would be on Oxygen or whatever.

In the end, this was an interesting book. It kept me on the edge of my seat and I needed to know what was going to happen next. The Cassidy family is a messed up family to all extremes. The only "normal" one was Lily, but she had major issues too....I'm glad she made up with her mom though, it was utterly stupid for her to shut her out like she did. Can't say why, but it was a dumb reason. Meh. ANYWAYS! I would recommend this those that like dramas and people stories. Out of five stars I shall stamp this with 4 stars. Mainly because some of the ending made me mad and I didn't like a lot of the characters. haha

Will be up this weekend then :)

Thanks for taking part in the tour. I'm glad you enjoyed Were the Wildflowers Grow!