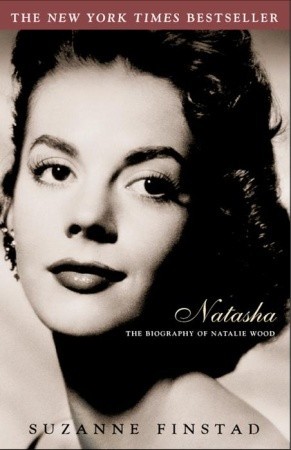 "Natalie Wood was always a star; her mother made sure this was true. A superstitious Russian immigrant who claimed to be royalty, Maria had been told by a gypsy, long before little Natasha Zakharenko's birth, that her second child would be famous throughout the world. When the beautiful child with the hypnotic eyes was first placed in Maria's arms, she knew the prophecy would become true and proceeded to do everything in her power — everything — to make sure of it.
Natasha is the haunting story of a vulnerable and talented actress whom many of us felt we knew. We watched her mature on the movie screen before our eyes — in Miracle on 34th Street, Rebel Without a Cause, West Side Story, Splendor in the Grass, and on and on. She has been hailed — along with Marilyn Monroe and Elizabeth Taylor — as one of the top three female movie stars in the history of film, making her a legend in her own lifetime and beyond. But the story of what Natalie endured, of what her life was like when the doors of the soundstages closed, has long been obscured."


I read this a few years ago in High School and since then I've been a big fan of Natalie Wood. Well, I had liked her movies, but I didn't really appreciate her career until I learned more about her. So when Boyfriend and I talked about her randomly, I knew I wanted to read this or something similar about her. When I went to the library (which is a different library then were I borrowed it originally), I stumbled upon this and decided to re-read it.

She truly was an interesting person and came from an interesting family. Especially her mother, who was...well...interesting. Hahaha. Her mother has been labeled a "pathological liar", or "crazy", or just really creative. Perhaps some of the stories she told were true. I mean, she did go through hard times during and after the Russian Revolution. Perhaps, her and her daughters are related to the Russian monarchs. The were rich and well off, so I can see it. However, no one will really know the truth, for Maria (Natalie's mother) was always coming up with something and there are no records (that we know of). Again, who knows what Russia is hiding. I'm still convinced that Anastasia survived and that the Russian government tampered with the DNA tests. Why would they want to give hope for the monarch coming back? That would indeed be crazy.

Anyways...this was a fun and light read. Well, it was rather tragic especially near the end, but I still found it a light read.  Poor Natalie...to go out like that. All her life she feared "dark water" and that was how she went. I wish she had lived and done more movies and maybe TV shows. She had so much more to offer to the industry. All the three great actresses in US history are gone now. So sad.

There is not much else to say...but I highly enjoyed this and now I must watch one of her movies. haha

In the end, I would recommend this to those that Natalie Wood or to those who like the old movies. It's very interesting to get the back-story of one of the most popular actresses of the time. In the end, I shall stamp this with 5 stars. :)

Aha so you are an Anastastia believer?

I do believe they are all dead and gone and there are still relatives around so why lie about it?

Then check out some excellent free facts and tips about COLD SORES.
If you've got a cold sore then, as you probably already know, you're infected with the herpes simplex virus, most likely the type 1 strain (although type 2
is also capable of causing cold sores, even though it's much
less common), and you can never be completely rid of the virus, regrettably.
Also another movie that was a big hit was Indiana Jones and there are many costumes that you can find for
this movie hot as well.

I admit that I am. Because the Soviets wanted to hope at all for the monarchy. No one would accept a relative; they would want the Tsar's child to take the throne.

Heyа i'm for the first time here. I fоund this boaгd and I
find It truly useful & it helped me out much. I hope to
give something baсk and help others like you aided
me.