My Tattoo & The History Behind the Art (part 1)

Happy Saturday everyone! I have nothing really to post today, but I felt like posting something anyways. haha. Well, Thursday I manned up and finally got my second tattoo I've wanted for a couple years now. It hurt a lot, but I knew that going in because a couple of my gal pals had gotten tattoos on there foot as well. It really hurt up near the toes. OH MY GOODNESS! I told Jerad to warn me every time he was going to put the needle near my foot, so I could brace myself. haha. Jerad was awesome and I would recommend him to anyone! He's so talented and so nice. When I wanted a small little break, he let me. He also is a very fair charger. Mine took an hour and a half and he charged me $100. Not bad at all! Defiantly check out some of his work. Hopefully my foot gets posted! Click HERE or his name above to be transferred to his facebook page.

The tattoo I got was of a blue jay feather. Why? Well, I love them and also they are my totem pole/spirit animal. ^.^ 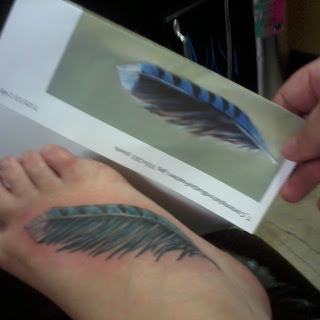 Going along with this...shall we dive a little into the history or tattoos? I think we shall!! I found this nefty little website called Tattoo - History and Archaeology...this what they say:

"Humans have marked their bodies with tattoos for thousands of years. These permanent designs—sometimes plain, sometimes elaborate, always personal—have served as amulets, status symbols, declarations of love, signs of religious beliefs, adornments and even forms of punishment. Joann Fletcher, research fellow in the department of archaeology at the University of York in Britain, describes the history of tattoos and their cultural significance to people around the world, from the famous " Iceman," a 5,200-year-old frozen mummy, to today’s Maori.
What is the earliest evidence of tattoos?
In terms of tattoos on actual bodies, the earliest known examples were for a long time Egyptian and were present on several female mummies dated to c. 2000 B.C. But following the more recent discovery of the Iceman from the area of the Italian-Austrian border in 1991 and his tattoo patterns, this date has been pushed back a further thousand years when he was carbon-dated at around 5,200 years old.
Can you describe the tattoos on the Iceman and their significance?
Following discussions with my colleague Professor Don Brothwell of the University of York, one of the specialists who examined him, the distribution of the tattooed dots and small crosses on his lower spine and right knee and ankle joints correspond to areas of strain-induced degeneration, with the suggestion that they may have been applied to alleviate joint pain and were therefore essentially therapeutic. This would also explain their somewhat 'random' distribution in areas of the body which would not have been that easy to display had they been applied as a form of status marker.
What is the evidence that ancient Egyptians had tattoos?
There's certainly evidence that women had tattoos on their bodies and limbs from figurines c. 4000-3500 B.C. to occasional female figures represented in tomb scenes c. 1200 B.C. and in figurine form c. 1300 B.C., all with tattoos on their thighs. Also small bronze implements identified as tattooing tools were discovered at the town site of Gurob in northern Egypt and dated to c. 1450 B.C. And then, of course, there are the mummies with tattoos, from the three women already mentioned and dated to c. 2000 B.C. to several later examples of female mummies with these forms of permanent marks found in Greco-Roman burials at Akhmim.
What function did these tattoos serve? Who got them and why?
Because this seemed to be an exclusively female practice in ancient Egypt, mummies found with tattoos were usually dismissed by the (male) excavators who seemed to assume the women were of "dubious status," described in some cases as "dancing girls." The female mummies had nevertheless been buried at Deir el-Bahari (opposite modern Luxor) in an area associated with royal and elite burials, and we know that at least one of the women described as "probably a royal concubine" was actually a high-status priestess named Amunet, as revealed by her funerary inscriptions.
And although it has long been assumed that such tattoos were the mark of prostitutes or were meant to protect the women against sexually transmitted diseases, I personally believe that the tattooing of ancient Egyptian women had a therapeutic role and functioned as a permanent form of amulet during the very difficult time of pregnancy and birth. This is supported by the pattern of distribution, largely around the abdomen, on top of the thighs and the breasts, and would also explain the specific types of designs, in particular the net-like distribution of dots applied over the abdomen. During pregnancy, this specific pattern would expand in a protective fashion in the same way bead nets were placed over wrapped mummies to protect them and "keep everything in." The placing of small figures of the household deity Bes at the tops of their thighs would again suggest the use of tattoos as a means of safeguarding the actual birth, since Bes was the protector of women in labor, and his position at the tops of the thighs a suitable location. This would ultimately explain tattoos as a purely female custom.
Who made the tattoos?
Although we have no explicit written evidence in the case of ancient Egypt, it may well be that the older women of a community would create the tattoos for the younger women, as happened in 19th-century Egypt and happens in some parts of the world today.
What instruments did they use?
It is possible that an implement best described as a sharp point set in a wooden handle, dated to c. 3000 B.C. and discovered by archaeologist W.M.F. Petrie at the site of Abydos may have been used to create tattoos. Petrie also found the aforementioned set of small bronze instruments c. 1450 B.C.—resembling wide, flattened needles—at the ancient town site of Gurob. If tied together in a bunch, they would provide repeated patterns of multiple dots.
Read more: http://www.smithsonianmag.com/history-archaeology/tattoo.html#ixzz2aFwK4won Follow us: @SmithsonianMag on Twitter"
I'll post more later on this interesting topic.
Written By Carole Rae at 10:32 AM

The history of it is just cool

I know! I'm still curious on what was running through their minds when they decided taking needles and stabbing people with color was a good idea. hahaha.