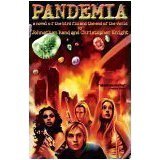 Author: Jonathan Rand (& Christopher Knight)
Title: Pandemia
Genre: SciFi, Dystopia, and Contemporary
Pages: 370
First Published: May 2006
Where I Got It: Borrowed from the library

"The world was warned.
The last great flu epidemic near the beginning of the previous century killed millions upon millions of people. Now, a new super-flu has infected humans and wreaked havoc in every country of the world in a matter of days."

This isn't typically a genre I read, but this was picked for the October book in my Book Club, so onward I go.

Honestly, it wasn't too bad for a dystopia. The beginning skipped around a little bit and I didn't like it, but the timeline does smooth out after a few chapters. Which...brings me to my next point...I disliked how short the chapters were. Each chapter was only about 3 pages long. I understand why the authors did this, but it just made the story seem choppy sometimes.

Besides for all of the that the story was a fun ride. I especially loved the fact that it was set in Michigan and I knew all the places they were talking about. It made the story more personal for me. However, I do question how long it took to get to Otter Lake from Saline. I don't think the authors did their research before writing the book. Otter Lake is only 2 hours away from Saline and is not by Gaylord...unless there is another Otter Lake, but I doubt it. Hmmmm *shrugs* But Boyfriend is from Otter Lake, so it was kind of cool to imagine the town being completely empty.

Anyways...the characters were interesting. A little predictable, but I'm glad there were only four main characters. It allowed for the reader to get connected with the characters, but not get bored with them. There is a lot of time and "slow" parts where nothing happens, so having a few characters helped, but there wasn't too many characters that it was overwhelming. I am glad they included an epilogue, but I didn't really like what happened. It seemed to HEA and "simple".

In the end, this wasn't at all bad for a dystopia. I don't usually care for that genre, but I liked this book. It wasn't over-the-top and it seemed like if the bird flu where to conquer the world that would be how it is. I didn't really care for the short chapters and the beginning, but the rest was fun. I'm not sure if there is another Otter Lake up north (I was trying to look it up and found nothing), so I am left to assume they either were mistaken or they made it up or it exists but isn't on the map. *shrugs* Oh well. I am pretending they went to the Otter Lake I know. haha. I would recommend this to people who like dystopia type books or who are looking for something different on their reading shelf. Out of five stars, I stamp this with 4 stars. It is more like 3.5 stars, but i rounded.

Oh but you posted today! I could totally have done that too, oh well next week ;)

Hahaha yeaaaaaaa, I had nothing else to post today, so I just did it. xD I thought you had something today, so I didn't mention it. Oh well.